Siri, dim the lights and warm us up: First gizmos for Apple HomeKit love-in emerge

But are we only excited because it's a Cupertino API? 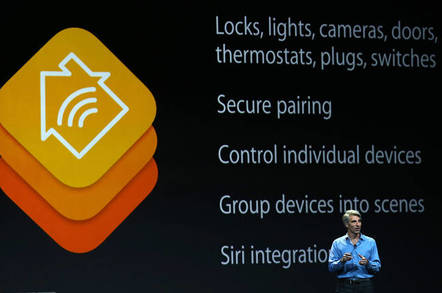 The first smart-home products compatible with Apple's HomeKit remote-control software have been announced – and some are even available to buy.

Most are smart-home gizmos already on the market but tweaked to be compatible with HomeKit, which allows iOS 8 iPhones, iPads and iPods to control stuff around the house wirelessly.

Such products include Ecobee's smart thermostat, Lutron's light switches and a new hub from home-automation veteran Insteon. However, Apple hopes that it will be able to drive the creation of new products designed to work with its software, and preferably not competing ecosystems.

The HomeKit approach will feature in all the big announcements from Apple at its annual developers conference in San Francisco next week: hence the unusual level of excitement over products that normally merit little or no attention.

In broad terms, it means that you will be able to use your iPhone and iPad as a smart-home remote control (something that most smart-tech companies already make possible through the use of apps). The AppleTV will act as your home hub/gateway and allow you to access the various products when you are not home.

People seem excited by the idea of being able to ask Siri to turn off your lights, although it's not clear why exactly. In a similar vein, people will also presumably be excited to see that the products also work with the Apple Watch.

There is a much bigger issue of course, which is why Apple is going to make such a big deal of HomeKit next week: it's an effort to use smart-home tech to pull people deeper inside the Cupertino world.

Much as the AppleTV makes the most sense of all the video streaming boxes if you have mostly Apple products (even though the Roku is better), if Apple can use its iPhones and iPads to pull people into its HomeKit ecosystem, it can not only get people to buy things like new AppleTV boxes but also use its position to profit from apps and gadgets aimed at smart-homes.

It's a smart move: the biggest problem in the smart-home tech field right now is that there are too many competing standards and platforms. A number of different companies are trying to become the Internet-of-Things ring that binds them – including Google, which announced its bid called Brillo last week at its Google I/O conference.

What a dominant platform must bring, as well as simplicity and a way to organize multiple products in a logical way, is an extra level of security, which is one of two main concerns of consumers when they consider smart-home technology. The other is privacy.

When we spoke to the CEO of one of the HomeKit-compatible products announced today, Ecobee's Stuart Lombard, he told us that to his mind, the smartphone was the entry point for the new market. "The technology in phones will have a significant impact on the decisions we make on connected devices," he told us. "You have Wi-Fi and Bluetooth in billions of smartphones, so if you include that in your product you have a step up."

In addition, he said "the key is the ecosystem." Ecobee has taken a conscious decision to work with whatever emerges, so its thermostat will work with Apple's HomeKit as well as Samsung's Smart Things, and start-up Wink.

Insteon's CTO Dan Cregg told us pretty much the same thing when we met him at IoT World last month. The company will make sure that its wide range of products will work with various ecosystems, and he also highlighted the smartphone as the decider of much of what will succeed in the rapidly expanding market.

Of the products formally announced today, two are available right away – Lutron's Caseta light switches and dimmers, and the Ecobee thermostat. The other two – Insteon's Hub Pro and Elgato's Eve product line of sensors (temperature, humidity, air quality) – are available to pre-order and are expected in the next month or so. ®