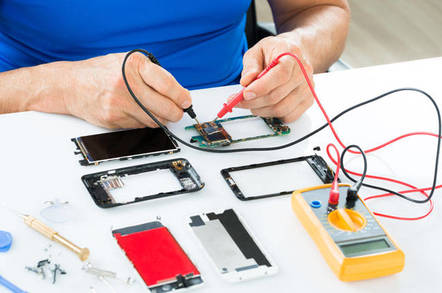 Rising dragon Xiaomi launches its Mi brand and online store in the UK on Tuesday.

However, before you rush off to order its cheap-but-good phones, you need to know that only four products are available – and none of them are phones.

The initial items are two batteries (10400mAh and 5000mAh), expensive semi-open headphones, and a fitness band.

The company is definitely ramping up to sell phones at some point, however, and has hired customer care company B2X to look after support and repairs.

B2X's CEO Thomas Berlemann described the company to The Register as being “asset light”, which means B2X doesn’t actually run call centres or repair phones, but provides what it calls a “cloud-based platform” – and what others would call a website – which the subcontractors use to manage the services.

So if a customer has a problem with a Xiaomi phone or accessory, the customer can take it into a repair centre, phone a call centre or download a diagnostic app and the B2X software will be used to help get the problem fixed.

B2X primarily supports smartphones rather than accessories, so the current situation where Xaiomi isn’t selling any phones is clearly a holding pattern pending phone sales, but Berlemann wasn’t prepared to be drawn into a discussion as to when this would happen.

It doesn’t appear that Xiaomi has any UK staff and B2X, which is based in Germany, deals with China. Initially B2X will work for Xiaomi in countries including Germany, France and the UK. Expansion plans for other countries are in the works, we're told.

Berlemann told El Reg that the door-to-door turnaround time for a replacement or repair for a Xiaomi product will be nine days or less.

"With B2X’s global reach and local on-the-ground expertise, we will be able to offer superior after sales service to our customers in Europe. The unique technology and smart service platform offered by B2X will help us adapt to customer needs quickly and effectively in this new, critical market," said a canned quote from Hugo Barra, veep of Xiaomi Global.

The Xiaomi Redmi 2A, featuring a 4.7in 720p display, quad core processor, Android 5.0 Lollipop and dual SIM 4G, sells in China for under sixty quid. ®