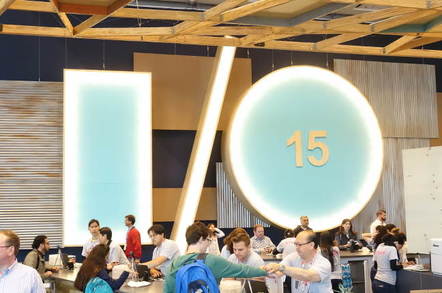 Google I/O For a developer event, this year's Google I/O conference in San Francisco sure spent a lot of time focusing on such consumer-oriented toys as personal assistants, photo apps, and budget VR. But there were actually a few legitimate developer tools on display, too.

Google senior director Jason Titus was given just a few minutes to run through the major tools updates during the 2.5-hour Wednesday morning keynote, but at least a couple of them were significant.

The most significant new feature in version 1.3 is that Android Studio now supports full editing and debugging of C++ in addition to Java.

"We recognize that many apps in the Play store are actually using the Native Developer Kit (NDK)," Titus said. "[In Android Studio 1.3] you have the error correction, code completion, and debugging that you use for your Java development."

The new version of the IDE also offers a new memory profiler and faster build speed using Gradle, among other improvements.

Currently, Titus said, Android Studio 1.3 is only available via the project's bleeding-edge Canary release channel, which means you should expect it to be fairly buggy. As with other Google software projects, it still must make its way through the Dev and Beta channels before finally being declared Stable.

Test in the cloud

Also for Android developers, Titus announced Cloud Test Lab, a new, free service that aims to help coders test their apps on multiple devices, including ones they don't actually own.

"After you upload your app, it will automatically run tests across the top 20 Android devices from around the world," Titus explained.

The tool will then generate a report that allows developers to see how their apps run on a variety of screen sizes and OS versions, including screenshots and videos.

It sounds very similar to the Test Cloud service that mobile dev tools vendor Xamarin launched in September 2014 – only in Xamarin's case, while the testing is much more comprehensive, it isn't free.

In Google's case, Titus said the Cloud Test Lab service is based on tech the online ad-slinger picked up when it bought AppPurify in June 2014.

So when will we actually be able to use Google's Cloud Test Lab? "[It] will be coming to the Google Play Developer Console, uh, soon," Titus said sheepishly.

Bones thrown to iOS devs ... and web devs, too

While adding C++ support to its IDE is all well and good, however, Google still hasn't done much as far as making its developer tools cross-platform. By comparison, earlier this year Microsoft announced that the next version of Visual Studio would support compiling Objective-C code ported from iOS directly into Windows Universal Apps.

Still, the Chocolate Factory did throw iOS developers a few bones at I/O this year. For one thing, Titus said, it's expanding its Cloud Messaging service, which allows flexible two-way messaging between mobile apps and Google's backend services, to support iOS in addition to Android.

Titus also said that beginning on Thursday, Mountain View is making Google Analytics, Google Maps, and many other of its libraries and frameworks for iOS available as CocoaPods, a popular method of importing third-party code into Apple's Xcode IDE.

Finally, developers who want to build web apps that look and feel consistent with Google's Material Design UI language for Android will want to check out the latest release of the Polymer library, which just hit version 1.0 on Thursday.

In addition to being considered production-ready, the project says the new version has been "rebuilt from the ground up for speed and efficiency."

Speaking of speed and efficiency, after jogging through these announcements, Titus was whisked away to make room onstage for Clay Bavor and Google's Cardboard VR headset. Sessions throughout the two-day conference drill deeper into each of these technologies, however, and video of them is typically made available not long after the conference concludes. ®

ARM64 and iOS 12 for devs, slow shuffle for venerable framework