Someone's been watching way too much Terminator 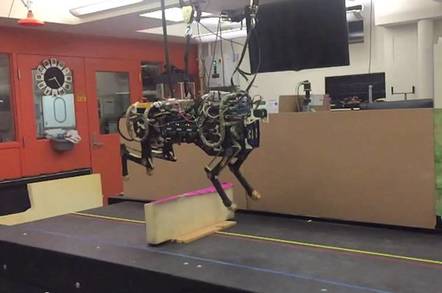 Vid Robot builders at MIT have created a cyber-cat that can run and jump over objects without human control.

The robot in question, the DARPA-funded Cheetah, is capable of leaping over walls 18 inches tall – more than half its own height – and continuing to run as fast as 22 kilometers per hour (13mph).

"A running jump is a truly dynamic behavior," explained Sangbae Kim, an assistant professor of mechanical engineering at MIT. "You have to manage balance and energy, and be able to handle impact after landing. Our robot is specifically designed for those highly dynamic behaviors."

The robot uses a Light Detection and Ranging (LIDAR) sensor in its nose to scan the road ahead, and measure the height of an obstacle and its distance within 100 milliseconds. Onboard software plants the two front paws close to the wall, pushes hard on those to bound over it, then pushes again powerfully from the front to bring the retracted rear legs over safely.

"If you want to optimize for, say, energy efficiency, you would want the robot to barely clear the obstacle – but that's dangerous, and finding a truly optimal solution would take a lot of computing time," Kim said. "In running, we don't want to spend a lot of time to find a better solution. We just want one that's feasible."

The system isn't perfect. Given the reaction times involved the robot failed to clear 30 per cent of walls place directly in front of it on a treadmill, but in a gymnasium with plenty of time to see the obstruction it leapt the obstacle 90 per cent of the time.

Cheetah has been under development for three years now, and can already reach the fastest speeds yet achieved by a robot. It is capable of operating off a battery pack, freeing it to roam around at will. While the boffins at MIT haven't considered weaponizing it yet, it's only a matter of time before someone else does (cough, cough, DARPA). ®