Hardcore creationist finds 60-million-year-old fossils in backyard ... 'No, it hasn’t changed my mind about the Bible' 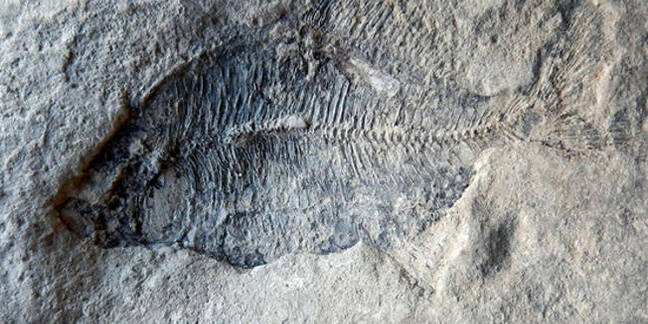 Evidence ... Photo of the discovered bones from University of Calgary

Pic An ardent believer in creationism has dug up fish fossils that boffins say are 60 million years old. That's somewhat further back in time than the genesis of life described in the Good Book.

If God does exist, he or she has a wicked sense of humor, it seems.

Experts at the University of Calgary in Canada say that the bones – or, rather, imprints of the prehistoric fish in sandstone – were pulled from the backyard of Edgar Nernberg. The rocks, excavated from Nernberg's home in Alberta, show a collection of five fish, and are believed to be around 60 million years old.

"Because complete fossils are relatively rare from this time period in Alberta, any such discoveries are significant as they shed light on the nature and diversity of animals that lived not long after the extinction of the dinosaurs,” said assistant professor Darla Zelenitsky.

"These fossil fish are important because they are very primitive representatives of a large group of bony fish known today."

An avid amateur fossil-hunter, and an excavator by trade, Nernberg said he has been interested in finding rare rocks since his childhood spent clearing stones on his family farm in Manitoba.

According to the Calgary Sun, Nernberg is a staunch creationist – believing Biblical accounts of the creation of Heaven and Earth – and has been a prominent backer of a nearby creation museum.

He maintains his belief that the planet came to be several thousand years ago, not the 4.5 billion years scientific evidence suggests.

"No, it hasn’t changed my mind," Nernberg told the paper. "We all have the same evidence, and it's just a matter of how you interpret it." ®

How does that work for reinforcement learning? +1 for shrinking tumor, -1 for death?