Biodegradable semiconductors will allow an Avatar lifestyle with all mod cons 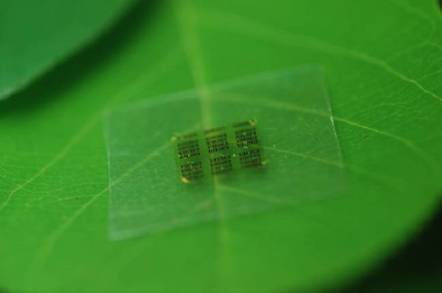 Boffins have developed a biodegradable semiconductor chip made almost entirely of wood in an effort to alleviate the environmental burden of electronic devices.

Technicians from the University of Wisconsin-Madison, in collaboration with the Department of Agriculture Forest Products Laboratory (FPL), have demonstrated the feasibility of replacing the substrate of a computer chip with cellulose nanofibril (CNF), a flexible, biodegradable material made from wood.

In the abstract to the article, titled High-performance green flexible electronics based on biodegradable cellulose nanofibril paper, and published in Nature Communications, the researchers claim to “report high-performance flexible microwave and digital electronics that consume the smallest amount of potentially toxic materials on biobased, biodegradable and flexible cellulose nanofibril papers”.

Furthermore, we demonstrate gallium arsenide microwave devices, the consumer wireless workhorse, in a transferrable thin-film form. Successful fabrication of key electrical components on the flexible cellulose nanofibril paper with comparable performance to their rigid counterparts and clear demonstration of fungal biodegradation of the cellulose-nanofibril-based electronics suggest that it is feasible to fabricate high-performance flexible electronics using ecofriendly materials.

Portable electronics are typically made of non-renewable, non-biodegradable and potentially toxic materials and are discarded at a very high rate due to corporations' plans for obsolescence and consumers' pursuits of new blahware. This means that they are expensive to dispose of without causing environmental damage.

The UN and Interpol have estimated that criminals make up to £19bn annually in improperly disposing of the ever-increasing surplus of electronics waste.

"The majority of material in a chip is support. We only use less than a couple of micrometers for everything else," said Univeristy of Wisconsin-Madison electrical and computer engineering professor Zhenqiang 'Jack' Ma. "Now the chips are so safe you can put them in the forest and fungus will degrade it. They become as safe as fertilizer."

The two key barriers to using wood-derived materials in an electronics setting are the surface smoothness and the issues caused by thermal expansion. Wood is naturally a hygroscopic material and could attract moisture from the air and expand. However, researchers manufactured a special epoxy coating on the surface of the CNF which dealt with concerns about both surface smoothness and moisture.

The group's work also demonstrated performance levels similar to existing chips. While the majority of today's wireless devices use gallium arsenide-based microwave chips due to their superior high-frequency operation and power handling capabilities, gallium arsenide is particularly toxic to the natural environment.

Yei Hwan Jung, a graduate student in electrical and computer engineering and a co-author of the paper, said the new process greatly reduces the use of such expensive and potentially toxic material.

"I've made 1,500 gallium arsenide transistors in a 5-by-6 millimeter chip. Typically for a microwave chip that size, there are only eight to 40 transistors. The rest of the area is just wasted," he said. "We take our design and put it on CNF using a deterministic assembly technique, then we can put it wherever we want and make a completely functional circuit with performance comparable to existing chips."

While the biodegradability of these materials will have a positive impact on the environment, Ma said, the flexibility of the technology can lead to widespread adoption.

"Mass-producing current semiconductor chips is so cheap, and it may take time for the industry to adapt to our design," he said. "But flexible electronics are the future, and we think we're going to be well ahead of the curve." ®

VW's US environment boss gets seven years for Dieselgate scam