Google puts Android on a diet, names it after the first thing it sees under the sink ... yes, Brillo

New IoT platform to take on, well, everybody else 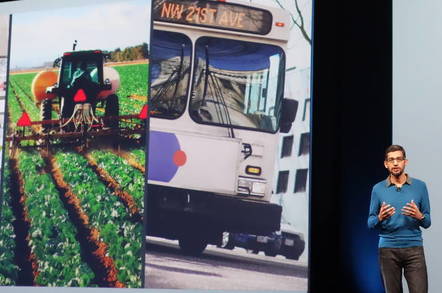 Google I/O Google is going after the Internet of Things with Android-based software aimed at powering a broad range of connected gizmos.

We've heard rumors that the Chocolate Factory was planning a move into the IoT market, but Google platforms senior veep Sundar Pichai formally announced the effort at the Google I/O conference in San Francisco on Thursday.

"Nest has been working hard at taking traditional devices and reimagining them," Pichai said during his keynote speech. But Google envisions a more broadly applicable platform, he explained, one that stretches beyond the connected home to power kit for everything from farms to city public transit networks and beyond.

To achieve this, he said, Google pulled together coders from the Nest, Android, and Chrome teams to collaborate on its new offering, which comes in two components – or three, if you prefer.

The first is Brillo, a new, low-footprint OS aimed specifically at IoT applications. Brillo is derived from Android, Pichai said, so it will be familiar to developers, and it is an "end-to-end functioning OS," but it has "minimal system requirements" so it can be used to power very lightweight kit.

The second new component is Weave, which Pichai described as a communications layer by which IoT devices can actually talk to each other. Weave allows developers to create standardized schemas that describe the properties of specific devices, and device makers can use these to let their kit understand the other devices that are around them.

Developers can use Brillo and Weave together, Pichai said, or they will be able to run Weave on top of their existing software stack.

The third component, if you will, is Android itself. Android phones and slabs will provide the UIs for all of these devices and support will be built into the Android OS, Pichai said, adding, "Any Android device will recognize any devices powered by Brillo and Weave."

Few details were on offer during Thursday morning's keynote, and Pichai admitted that this first stab at the IoT market would be "the beginning of a journey."

Pichai did say, however, that a developer preview of Brillo would be available by the third quarter of 2015, while Weave would be feature complete by the fourth quarter. ®