Elon Musk's SpaceX: Now we help do SURVEILLANCE for the SPOOKS 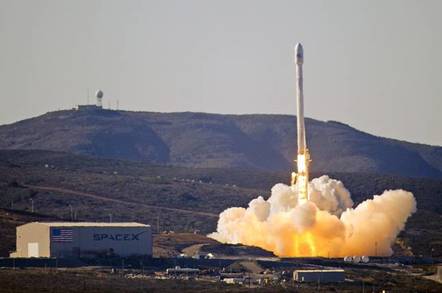 After an extended spat between Elon Musk and the US Air Force, SpaceX has finally been certified for military space missions, muscling into what had been a cosy monopoly held by a Lockheed-Boeing joint venture.

An Air Force press release notes that the first opportunity for SpaceX to compete to provide launch services will probably be in June, for the GPS III satellite launch.

“This is a very important milestone for the Air Force and the Department of Defense," said the Secretary of the Air Force, Deborah Lee James, who added:

SpaceX’s emergence as a viable commercial launch provider gives the opportunity to compete for launch services for the first time in almost a decade.

Ultimately, leveraging of the commercial space market drives down cost to the American taxpayer and improves our military’s resiliency.

SpaceX will now be able to compete against the former monopoly holder, United Launch Alliance (ULA), a coalition between US aerospace-defence behemoths Lockheed and Boeing. It will be in the market to launch not only friendly GPS spacecraft, but also spy satellites which can be used to carry out surveillance against nations and persons of interest. It has been suggested in the past that this could include the USA and US citizens.

The Air Force describes this "milestone" as "the culmination of a significant two-year effort on the part of the Air Force and SpaceX to execute the certification process and reintroduce competition into the Evolved Expendable Launch Vehicle (EELV) program".

SpaceX announced in January that it had reached an agreement with the USAF for "a path forward for the Evolved Expendable Launch Vehicle (EELV) program that improves the competitive landscape and achieves mission assurance for national security space launches".

The agreement was part of a settlement resulting from an extended era of grief between the USAF and SpaceX, during which Elon Musk accused a former official of bribery.

SpaceX, per the settlement, dismissed its claims relating to the EELV block buy contract, which at that time was pending in the US Court of Federal Claims.

The Air Force agreed to work collaboratively with SpaceX to complete the certification process "in an efficient and expedient manner."

Commenting on the SpaceX certification, SpaceX CEO Elon Musk said: "This is an important step toward bringing competition to National Security Space launch. We thank the Air Force for its confidence in us and look forward to serving it well." ®