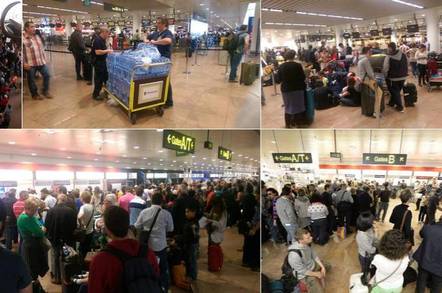 Bzzt: A power surge knocked out air traffic control over the whole of Belgium

An “electrical fault” wiped out Belgium's air traffic control systems nationwide this morning, according to Belgocontrol, which is responsible for air navigation above Belgium and Luxembourg.

A power surge knocked out the air traffic control system, as well as back-up power generators. An investigation into what caused the surge is ongoing.

All flights in and out of Belgium were grounded at around 9.35am local time. Belgocontrol said in a statement that it was doing its utmost to “restart the installations as quickly as possible” and advised passengers to check flight information online and contact their airline.

“Brussels Airport will keep you up-to-date via the website, app and the Brussels Airport Facebook and Twitter accounts,” it reassured those stranded at Belgium’s five airports.

According to Belgocontrol’s website, the control tower at Brussels Airport sets a standard for the rest of Europe and the world to follow, by bringing together “all services involved in air traffic control in the same building: air traffic control and ATS management, AMS (Airport Movement System) software developments, as well as aeronautical and meteorological information services.”

Unfortunately, this means that one good power surge into a single building knocks down the whole system. Well done.

Flights have been diverted to airports in Paris, Lille, Frankfurt and Maastricht – all without the help of Brussels' state-of-the-art control tower. ®