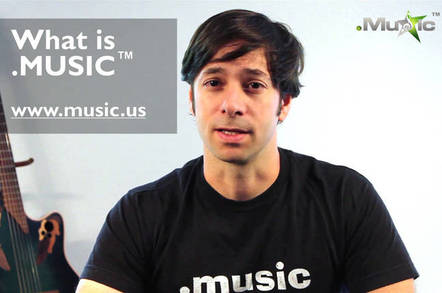 In what could prove to be an extraordinary David versus Goliath story, an independent musician may walk away with the highly coveted .music top-level domain, beating off competition from Google, Amazon, and the music industry itself.

Constantine Roussos' DotMusic Limited, based in Cyprus, has received the formal backing of the International Federation of the Phonographic Industry (IFPI) for an application that would give his company the rights to sell all internet addresses ending in dot-music – rights worth tens of millions of dollars.

The IFPI represents 1,300 record companies in 63 countries and includes every major recording company. It made its support explicit in a letter sent to domain name overseer ICANN last week and now published online [PDF].

That support may be just what Roussos needs to pass a "community evaluation" for his application that is expected to happen next month. If successful, he would be given priority over far better-funded rivals including online giants Amazon and Google, as well as the four largest internet registry specialists: Donuts, Minds+Machines, Radix, and Famous Four.

The bar to pass the community evaluation is high and was missed spectacularly by the eighth applicant for .music - Far Further LLC - which also boasted the support of large sections of the music industry.

Far Further scored just 3 out of 16 possible points in its evaluation in October (it needed 14 to pass), despite the support of dozens of music trade groups. The panel decided that its application did not represent the millions of amateur musicians that exist worldwide.

The panel even accused Far Further of trying to fudge the process. "The applicant appears to be attempting to use the gTLD to organize the various groups noted in the application documentation, as opposed to applying on behalf of an already organized and cohesive community," its report [PDF] read in part.

Conversely, Roussos application was developed to provide a voice and outlet for musicians and his company has spent years building endorsements from more than 100 global music organizations large and small.

"Our community-based initiative for .music has assembled the largest global music coalition in the history of music to support a music cause," he told El Reg. "It represents over 95 per cent of music consumed globally."

That combination of artist-led organizations - and now music industry support - will put significant pressure on the independent company that ICANN pays to evaluate community applications to approve the application given its previous report. According to Roussos, the bid will "exceed all ICANN community requirements".

Roussos has himself exceeded all expectations with his bid, having been written off almost from the start. The amateur musician and entrepreneur was passionate about his bid, but faced with well-organized and deep-pocketed competitors, many of whom have already spent tens of millions of dollars on acquiring new internet extensions (Google paid $25m alone for '.app'), few gave him much chance of success.

It is that focus on the musicians themselves that has led to the music industry's decision to back him: all the other applicants for the name will make the extension available to anyone that wants a '.music' address, whereas DotMusic will limit addresses to musicians and the broader music industry. The company has also taken a strong stance on piracy.

"The DotMusic mission is create a safe haven for legal music consumption under a trusted, secure and authentic .music top-level domain," Roussos told us. "Our objective is to create the standard for validated music websites operating under music-tailored policies that enhance legal music consumption, protect copyright and eliminate cybersquatting."

When the evaluation panel reports - something it is expected to do in the next month - it may end up rewarding that determination and industry-focused approach with one of the most valuable pieces of real estate that exists online. ®

DotMusic's Paul Zamek has been in touch to stress that .music will belong to "the music community."