Weird behaviour never before seen in our Milky Way 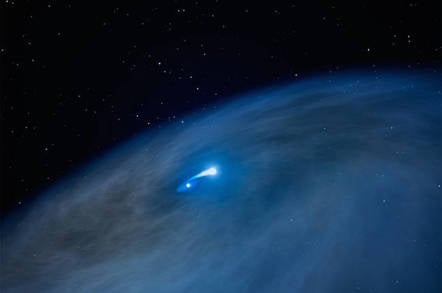 Scientists have observed odd features present in a supermassive star in our galaxy that they have somewhat appropriately dubbed Nasty 1.

It was in fact first clocked decades ago, when astroboffins believed they had found a Wolf-Rayet star – a rare type of hot, cosmic beast that grows huge in its old age as it starts to run out of hydrogen.

However, astronomers, who used NASA's Hubble Space Telescope, said the kind of "weird" behaviour displayed by Nasty 1 – which derived its name from its catalogue moniker of NaST1 – had never been seen before in our Milky Way galaxy.

"We're finding that it is hard to form all the Wolf-Rayet stars we observe by the traditional wind mechanism, because mass loss isn't as strong as we used to think," Nathan Smith of the University of Arizona said.

"Mass exchange in binary systems seems to be vital to account for Wolf-Rayet stars and the supernovae they make, and catching binary stars in this short-lived phase will help us understand this process."

The study's lead author Jon Mauerhan of the University of California said that the disk-like structure could be evidence of a Wolf-Rayet star forming from a binary interaction.

The scientists were surprised to discover Nasty 1's peculiar "pancake-shaped disk of gas encircling the star," which is believed to be roughly 2 trillion miles wide.

The boffins, whose results have been published in the Monthly Notices of the Royal Astronomical Society, added:

[It] may have formed from an unseen companion star that snacked on the outer envelope of the newly formed Wolf-Rayet. Based on current estimates, the nebula surrounding the stars is just a few thousand years old, and as close as 3,000 light-years from Earth.

The disk may have been created around the binary after stripped matter had spilled out "during the dynamic gravitational tussle between the stars," the astronomers theorised.

"That's what we think is happening in Nasty 1," said Mauerhan. "We think there is a Wolf-Rayet star buried inside the nebula, and we think the nebula is being created by this mass-transfer process. So this type of sloppy stellar cannibalism actually makes Nasty 1 a rather fitting nickname." ®