Multiple fondling on the MIGHTY 12-INCH iOS 9 SLAB — so, so close now

Two windows, two users at a time? How is that possible? 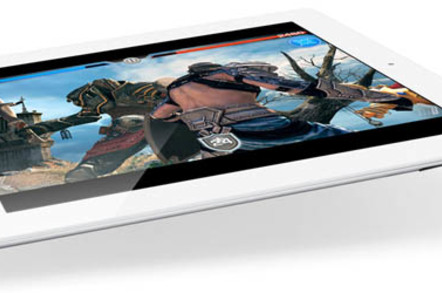 News comes to the world this morning of the next generation of fondleslab, which – fanbois take a breath – may ship with dual-wielding app support in iOS 9.

NDTV Gadgets suggested Tim Cook's workers have created two whopping 12-inch iPads, which have been given the codenames J98 (Wi-Fi only) and J99 (LTE).

The gigantic fondleslabs have been more commonly known by the moniker iPad Pro, although whether Cupertino will stick with that name is unknown.

9to5Mac reported that Apple will be presenting the feature for iOS 9, allowing users to wield a brace of apps on their enormous fondleslabs, using currently available iPad models.

It is understood that users will be able to divide up their screen space into equal halves or unequal thirds.

"When split, the screen can either display two different apps side-by-side, or multiple views of the same app," 9to5Mac said, which could enable fanbois carting around the digital tabletops to "see two separate Safari tabs, or compare a pair of Pages documents at the same time."

The future is truly here.

Both of these machines will also support multi-user logins, preserving separate configurations of apps and media files for shared fondleslabbage.

"Sources" have indicated to 9to5Mac, however, that the feature will not debut in the WWDC Keynote, and indeed will probably not be ready when iOS 9 ships out after the Summer.

Apple execs are fond of the multi-user login idea, however, and its development is running parallel to that of the iOS 9, though it may be released afterwards in a .1 or .2 update. ®