School's in for Chromebooks, Google's the top swot in class

ChromeOS getting 'em while they're young 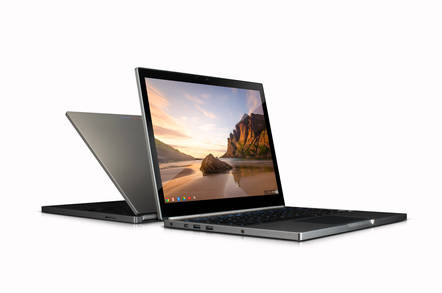 Chromebooks will be shipping to the tune of 7.3 million units this year, thanks mostly to educational sales.

Research house Gartner estimates that the 2015 calendar year will bring banner sales for the operating system as more schools and home users seek out Chromebooks. Should Chromebook reach the 7.3 million unit mark, the figure would represent a 27 per cent increase over last year.

Overall, the North American market is the strongest for Chromebooks. Gartner estimates that 84 per cent of all Chromebooks sold were sent to the US, Canada and Mexico last year.

Created by Google as a low-cost method for running web applications, Chromebooks rely heavily on online software to perform basic tasks such as word processing. While often underpowered hardware-wise, Chromebooks have shown themselves well-suited to basic tasks and very secure.

Though mostly an educational device at the moment, Gartner analyst Isabelle Durand notes that the platform could also have some use in the business sector.

"Chromebook is a device that can be considered by SMBs or new startup companies that do not have the resources to invest too much in IT infrastructure," said Durand.

"Chromebooks will become a valid device choice for employees as enterprises seek to provide simple, secure, low-cost and easy-to-manage access to new web applications and legacy systems, unless a specific application forces a Windows decision."

"The major factors that affect the adoption of Chromebooks by consumers remain the connectivity issue in emerging markets, but also the ability for users to understand and get used to cloud-based applications, and keep content in the cloud and ecosystem."

By 2016, Gartner estimates that some 7.9 million Chromebooks could be moved annually. The majority of systems are pegged for delivery in the US, though sales in the EMEA region could account for as many as 1.2 million of all Chromebook sales by next year.

Even with the growth in potential consumer and business markets, analysts say that education will continue to be the primary market for Chromebooks. Acer is projected to be the biggest manufacturer of Chromebook devices, followed by Samsung and HP. ®