Elves vs. Dwarves argument among retro-devs as Men just get on and play improved game 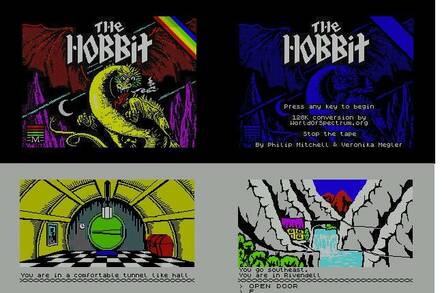 Sinclair appreciation site World Of Spectrum recently relaunched its forums, after they fell over last year and users were forced to endure a temporary replacement.

To celebrate the relaunch, a member and developer using the handle Kayamon released something rather nice: a re-working of classic adventure game The Hobbit with new graphics to take advantage of the Spectrum 128's enhanced capabilities.

As the image at the top of the story shows, the revived version offers rather better graphics than the original.

But Kayamon's efforts are not appreciated by all, especially by Spectrum dev Einar Saukas who was working on the project for a while before this release.

Kayamon says that Einar all-but-abandoned the project, so he was within his rights to finish it off and release it. Einar says Kayamon overstepped the mark and ignored clear indications that he intended to get the job done.

Arguments between the two are have appeared in this forum.

Summarising the arguments requires a Tolkien metaphor: Einar is elf-like inasmuch as he does things on his own timetable for his own reasons. Kayamon is a bit dwarf-like as he saw something shiny and bright and dug it out regardless of the consequences. Plenty of other folks in the forum are Men: just happy to have an improved game to play and not too fussed about the deep politics of the situation.

One “man”, ”Daren” likes it so much he's posted a walk-through of the new version so you can see the lovely new fan-contributed art.