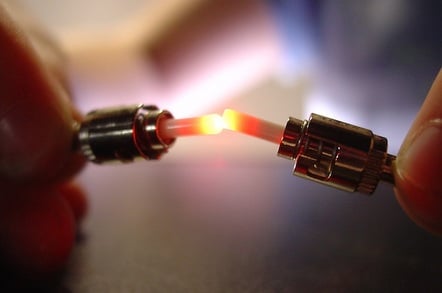 Singapore's dominant telco, Singtel, has announced a pilot deployment of 10Gbps broadband to a select group next quarter, and says that it expects the blistering fast Internet service to be generally available by the later part of this year.

The high speed connectivity is only possible due to the completion of Singapore’s Next Generation Nationwide Broadband Network (Next Gen NBN) initiative - a master plan to wire up every corner of the city state with fibre optics.

Singapore’s small land area of 716.1 square kilometers certainly makes delivering fibre to the home a much easier proposition than in most other countries in the world.

Yet 10Gbps services are rare anywhere: telcos in Hong Kong and Korea are experimenting with broadband at these speeds while US Internet offers such a service in Minneapolis. Singtel stepping up and promising commercial services by year's end is therefore globally noteworthy.

“Over 70 per cent of our customers are on fiber,” said Singtel chief technology officer Tay Soo Meng in a canned statement. “Most of these households already have multiple devices connected to their home network. The adoption of this technology will help us meet demand as the number of applications increase and become even more bandwidth-intensive.”

Singaporeans already do okay by global standards: local internet service provider ViewQwest launched a 2Gbps service in March at SG$99.95 (US$74) per month. That plan comes with a sting: a special MikroTik router is required to get to top speed and that costs SG$689.

Singtel wouldn't say what customer premises equipment will be required for its 10Gbps service, saying only that more information will be revealed closer to the launch of the pilot service. ®