IaaS is OVER, ladies. Time for OpenStack to jump clear 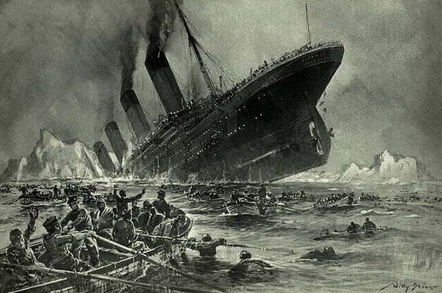 Sinking ship? OpenStack devotees may need to reassess their priorities

Data. Was ever such a single word filled with such promise – and heartbreak – for IT firms?

In the cloud, succeeding in getting hold of people’s data means these people are incentivized through inertia to stay with you. That’s the promise, at least.

The rub? Actually making a successful business from people’s data. The act of simply owning people’s data just isn’t enough to get rich. You must give people services on top of that; providing services which let people use the data is what matters.

The theory is simple: companies waste billions of dollars a year on hot and cold storage, tape, disk and SSD – dollars sacrificed on static infrastructure. Let companies re-allocate IT budgets by charging them less for the storage part by delivering it as a service.

But, storage is infrastructure and this week Gartner reckoned it's infrastructure service clouds that are poised for a huge shake-up. The crystal ball-gazers' latest report found spending on IaaS will increase 32.8 per cent to $16.5bn this year as the IaaS landscape rapidly consolidates around a small number of market leaders.

Gartner’s report this week noted that it's providers of infrastructure services that are suffering worst in the gold rush that was supposed to be cloud. Amazon Web Services, followed by Microsoft Azure and Google Compute Engine are shaping to be the big three of the 15 IaaS providers this year.

Everybody else is left taking remedial action, according to Gartner, by launching new IaaS, substantially changing their existing IaaS platform, moving into more managed services or by getting out entirely – discontinuing or “significantly” reducing services. User: beware.

AWS, Azure and Google don’t float on OpenStack. They run on their own proprietary elastic data and compute architectures. It’s the feeding pool of the OpenStack sector that seems poised for the greatest snap back.

Those lagging behind AWS and Microsoft are firmly in the OpenStack camp: Rackspace, Virtuastream, CSC, VMware, NTT Communications and IBM. You can read the full list here.

HP – featured in past Gartner reports – doesn’t even figure in this year’s calculations because it’s doing so poorly. The OpenStack conference in Vancouver underlined this, with a slow scraping of the chairs across the deck of this Titanic to take up new positions.

Ubuntu’s announced software-defined storage for a choice of storage mediums – Ceph, NextentaEdge, Swift and SwiftStack, with pricing not on a write, disk or node basis but on a charge of $0.022 per month – to undercut the big three.

Red Hat rolled out a preview of its Gluster Storage, using the OpenStack Manilla project as its lead for scale-out shared file storage on OpenStack. Storage servers can be added or removed from a Red Hat and OpenStack cloud while hot, with the data remaining online as the system rebalances the hardware. It’s planned for inclusion in the forthcoming Red Hat Enterprise Linux OpenStack Platform 7.

IBM tried to level up its game: new OpenStack services on its SoftLayer infrastructure-as-a-service as well its Bluemix platform-as-a-service.

Once again, choice is the justification. “IBM CloudStack Services gives us the ability to easily move OpenStack workloads across hybrid clouds,” IBM said.

There is good news for OpenStack: it’s turning into something to run private clouds – kind of an elastic compute and storage fabric for the VM averse.

US retail giant Walmart was acclaimed by the OpenStack faithful for betting its entire e-commerce operation on OpenStack, an infrastructure worth 100,000 cores and petabytes of storage. Walmart dumped the legacy Oracle ATG e-commerce platform, going for scalability and freedom to customize code.

Like other retailers, Walmart is vexed by the decline in foot-bound traffic and the rise in mobile and online shopping. Last year, less than five per cent of its $420bn revenue came from online but the giant is trying to change that. The firm's 2014 online Thanksgiving shopping figures were its biggest ever, 1.5 billion views, with 70 per cent of traffic coming from the thing that's helping almost every other retailer: mobile.

Doesn’t sound very cloudy, does it? Sounds more like a middleware story.

When Rackspace and NASA unveiled OpenStack at OSCON in 2010 the idea a Linux for the cloud taking on AWS, not a replacement to Oracle ecommerce.

And before you do start popping the champagne corks, Walmart had to land a former HP OpenStacker in order to float this elastic retail platform.

The fact Walmart grabbed a former HP guy working on HP’s technically complicated but commercially invisible cloud tells you where the opportunity lies.

The future of the non-Microsoft, Google and AWS IaaS is not as an open alternative to the proprietary troika. That lies in being elastic middleware and in offering the skills that customers, like the Walmarts of this world, lack in order to build using IaaS.

That or you can keep sweating more creative ways to repackage vanilla infrastructure data services or adding more storage features to OpenStack to attain some elusive parity with AWS before you ultimately hit the wall. ®