Amazon cloud to BEND TIME, exist in own time zone for 24 hours 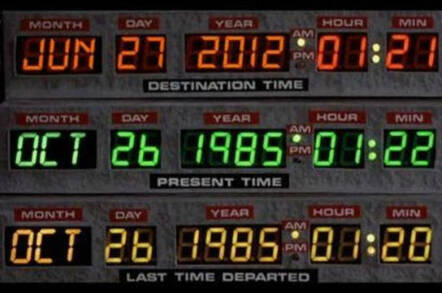 Amazon’s mighty cloud will exist in its own time zone for a 24-hour period next month.

For 12 hours each side of midnight on June 30, Amazon will make each second on its AWS servers’ slightly longer than the accepted standard definition of one second.

Amazon’s cloud will also run for up to half a second behind Universal Coordinated Time (UTC) for 12 hours either side of midnight on June 30.

The official definition of a single second comes thanks to the caesium-based atomic clock at the National Physical Laboratory in south-west London. One second is officially defined as the time taken for 9,192,631,770 cycles of the radiation produced by the transition between two levels of the caesium 133 atom.

That definition is now the basis of UTC, the international time standard maintained by a network of seven atomic clocks. It’s been the accepted measure of the second since 1967, when it became an SI standard. And, via UTC, it's been a way to sync computers since 1985 with NTPv0 for Unix systems.

The reason AWS is fiddling with your minds on time is to try and cope with time standards’ chiefs addition of the forthcoming leap second to UTC on June 30.

Rather than use a big-bang approach to adding the new second to its servers’ clocks, the cloud giant has determined it best to smear the second across its tens of thousands of servers worldwide for a period of 24 hours either side of midnight. The AWS systems that will be running the non-standard second and outside earth time will be AWS management console and “back-end systems.”

“The AWS management console and back-end systems will NOT implement the leap second,” Amazon said here. “Instead, we will spread the one extra second over a 24 hour period surrounding the leap second, by making each second slightly longer.”

EC2 instances have their own clocks and will need to be updated by their owners, Amazon said. It has recommended using NTP to synchronise to the time servers of your choice. NTP is a series of protocols used to synchronize computer clocks to within a few milliseconds of UTC and that references UTC.

Instances using NTP, the default on Amazon’s Linux AMIs, or time.windows.com for Amazon’s Windows AMIs should receive the leap second by default.

Efforts to stop adding a leap second and retain the perfect UTC have been debated and apparently dismissed or postponed by the time body responsible for the standard – the International Bureau of Weights and Measures (BIPM), based outside Paris, France.

The first leap second was added to UTC in 1972, five years after it was adopted as a standard. Some think the process of adding leap seconds is ultimately unworkable, as by 3752, time chiefs will need to add a leap second to UTC every month.

The last leap second was added on June 30, 2012, and caused chaos for travellers down under thanks to a longstanding time bug in the Linux kernel.