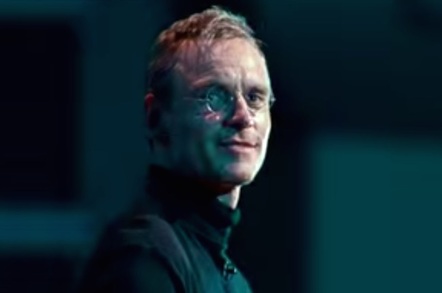 The Aaron Sorkin-penned, Danny Boyle-directed and Michael Fassbender-starring Steve Jobs movie has emerged with a release date and teaser trailer.

The film, titled Steve Jobs, will see the light of day on 9 October.

The sparse teaser trailer, below, gives us a look at Seth Rogen as Steve Wozniak, Jeff Daniels as John Sculley and Kate Winslet as Apple marketing operative Joanna Hoffman.

None of them sound particularly happy with Jobs, who says, perhaps in response to a provocation, that “the musicians play the instruments, I play the orchestra.”

It looks like the film does indeed centre around Jobs' presence at Apple keynotes, as Social Network and West Wing scribe Aaron Sorkin had long-intended.

A previous film on the Apple co-founder – the Ashton Kutcher vehicle, Jobs – pulled in a meagre US$16m at the box office, according to Boxofficemojo.

Steve Jobs arguably has a superior screenwriter, director and cast. By October we'll know if those names add up to a better-received film. ®