Embattled grocer's network needs one of those yellow 'reduced' stickers 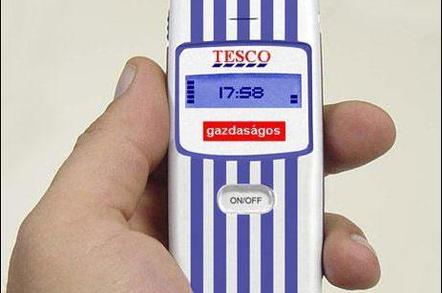 Analysis Tesco is rumoured to be selling off Tesco Mobile, its mobile phone network. The move comes as no surprise, with the company hauling back to its core businesses after dismal results, recently writing down assets to post a loss of £6.4bn.

Figures given for the value of the business sit at about £700m. This is on the basis of Tesco Telecom contributing £100m to the profits (or otherwise) of Tesco.

However, when we asked Tesco for a breakdown of those figures, the company demurred, citing commercial confidentiality.

Tesco Mobile has around four million customers, some with contracts but mostly pre-paid. Tesco would not give us a figure, but based on an average revenue per customer of £8 a month (which errs on the side of generous), a market value would be less than £100 per customer.

A lot would depend on the proportion of those four million accounts which are no longer used and are waiting to be deactivated. No figures were available for churn, subscriber acquisition cost or retention cost.

Pricing is coming under pressure. BT recently made this clear to shareholders when they were asked to approve the purchase of EE, with BT saying that there was increased likelihood of revenue per customer dropping. There are several new players waiting in the wings, not least Sky and The Post Office.

Tesco Mobile is a joint venture with O2, and any purchaser would have to use the O2 network as switching would mean swapping out SIMs. This precludes a sale to BT/EE or Vodafone. As O2 is being bought by Three, either of those two latter networks remain as options.

O2 also runs customer service and billing for Tesco Mobile, so a purchaser would need to have, build or buy these services. This makes the front runners for a purchase Virgin Mobile and TalkTalk, the latter of which recently brought BlinkBox from Tesco.

Normally a brand such as Tesco Mobile would have a substantial value attached to it, but in an industry which has thrown away One2One, Cellnet and amazingly Orange (BT should resuscitate it), the Tesco Mobile brand could have less value than Tesco might hope.

In a high-churn business such as pre-pay mobile, it’s vitally important to have a constant flow of new subscribers. Tesco Mobile’s strength is the distribution and profile the services and phones are given in Tesco stores.

The company is fabulously scientific about valuing its self-space and any undertaking to continue promotion under new ownership would need to be carefully written and monitored.