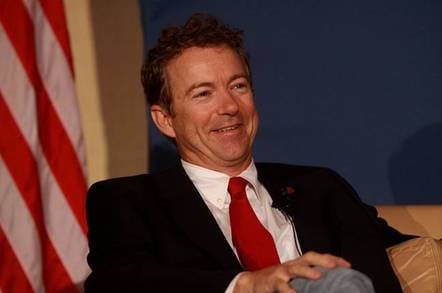 US Senator Rand Paul (R-KY) has said he will filibuster to prevent any renewal of the controversial Patriot Act, several provisions of which expire on 1 June.

Among the most notable is the ability to create a legal basis for surveillance activities by the NSA.

"We will be filibustering [and] we will be trying to stop it," said Paul. "We are not going to let them run over us [and] we are going to demand amendments ... we are going to make sure the American people know that some of us at least are opposed to unlawful searches."

It is Section 215 of the Patriot Act that is set to expire, although many Republican and Democratic senators are set to support its renewal, some even attempting to establish further basis for increased powers to combat terrorism. It essentially allows the NSA's mass-collection of all communications metadata.

Kentucky-based Rand, a Tea Party friend and self-declared Libertarian Republican, is seemingly keen to establish that it is American citizens he is concerned about, and who are being affected by the blanket surveillance activities of the NSA.

The rest of the world he doesn't mention so much, maybe because they can't vote for him. Questions are still being asked as to whether foreign persons may benefit from any touted reining in of the surveillance powers.

Following a federal court ruling judging the NSA's mass wiretapping program to have exceeded its legal authority, Paul took to Facebook to praise the judgment and rally his support.

"The surveillance statists are coming with their crosshairs on their most powerful opponent – our movement to take our country back! I'm ready to fight tooth-and-nail to stop this assault on the Bill of Rights and prevent a blanket reauthorization of the so-called 'PATRIOT Act'."

Rand is also seeking the Republican nomination for the US Presidential elections in 2016.

A filibuster is a tactic in which a lawmaker's right to speak is exercised to such length that it obstructs the bill or proposal under discussion from coming to vote.

The longest filibuster in the reasonably rich history of such activities in the Senate occurred in 1957. South Carolina's Democratic Senator and a supporter of segregation, Strom Thurmond, spoke for more than twenty four hours to obstruct the passing of the Civil Rights Act of that year.

The Senate will go into recess on May 22, meaning that a decision could be reached a mere week before the Patriot Act expires. ®