Theresa May: Right, THIS time we're getting the Snoopers' Charter in

Gordon Brown's vision to be realised at last? 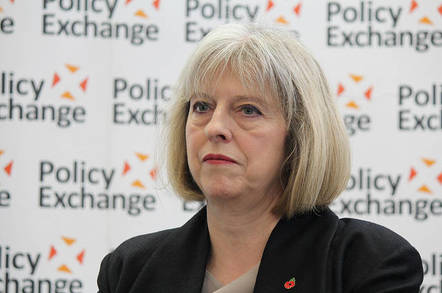 The long-delayed Snoopers' Charter allowing increased interception of communications by the security services and the police is set to be introduced at last, Home Secretary Theresa May has suggested.

Within minutes of results indicating a likely Conservative majority government early this morning, May responded to BBC questioning by restating her aim of giving the security services more freedom to intercept Britons' communications data.

Coalition conflicts regarding the controversial Draft Communications Data Bill are no longer applicable within a consolidated Conservative majority, and May's statement suggests the Home Office is prioritising the re-introduction of the bill, which will extend the breadth, depth, and bulk of state interception of communications data.

Nicknamed the "Snoopers' Charter", the bill had been opposed by the Conservatives' Liberal Democrat partners in government.

Although it eventually made an appearance in legislative draft through amendments to the Counter-Terrorism and Security Bill, this was ultimately defeated in the House of Lords.

Despite this setback, state surveillance activities actually increased year-on-year under the Coalition government.

The Communications Data Bill has been awaiting introduction in various forms ever since 2008, when it was announced by Gordon Brown, who as Labour Prime Minister enjoyed a much stronger majority (66 seats) than Mr Cameron has won today. Nonetheless the Snoopers' Charter didn't make it onto the statute books then. As it is known to have opponents on the Tory backbenches also, Ms May may still find she has a fight on her hands to get it introduced now.

The Register has contacted several parties for comment and analysis and will update with a further article when these are available for publication. ®

Australia’s SigInt spooks may be turned inwards after all

Both make it harder to connect you to your connections

'Oblivious DNS' decouples users from the sites they visit

Meanwhile, 'Other Bets' group hemorrhages less than before