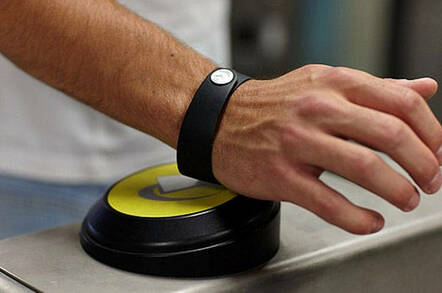 Barclaycard will be switching off the service for the bPay mobile payments bracelet on May 31st.

The company claims that there will be a replacement in June and, while it can’t say what that will be, it is willing to share the expectation that it will be really, really good. The bank told us:

"To do this we need to make some changes to our technology and so, per their terms and conditions, the current bPay bands will no longer work from the end of May."

It is unclear why the existing systems cannot run until the new one is introduced.

The service was launched last September with a roll-out to 10,000 users, and has been heavily promoted since.

bPay is a system where customers with any flavour of Visa or Mastercard can pay into the bPay wallet account and then bonk to pay.

The service only supported payments of up to £20. This was the limit for NFC payments, but that has now been raised to £30. With cards it’s possible to enter a PIN for transactions of greater value, but while the bPay band was effectively a pre-payment card, there was no PIN attached, and it was not possible to use the sixteen digit account number, CVV and expiry date for online transactions or anything other than registering the band with TfL.

The bracelets which were issued free were particularly aimed at commuters using the new contactless payment on London Underground. It’s not clear if the replacement will be a bracelet.

While bPay was rolled out as a full service, when we asked about the shutdown a Barclaycard spokesman refered to it as “the current trial”. Historically this is the phraseology mobile money companies have used for NFC services - such as Cityzi in France - which are judged to have failed.

We did ask how many bPay users were affected and how many people used the system regularly. We were told that 10,000 were affected:

“We'll refund any money left on them at this time onto the last card used to top them up.” ®

Apple told tribunal it wouldn't abide by a ruling against it