Why is the orbit so big, and why is it there? 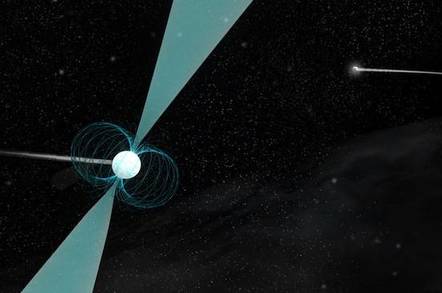 A bunch of high-school students has turned up a record-setter in the world of astro-boffinry: a pulsar with the biggest-ever orbit around a neutron star.

That's exciting to astrophysicists, because the orbital oddity creates a new set of boundaries for such objects – and thus, a new line of investigation to help understand them.

The orbit – roughly that of Mercury's around the sun, with a period of 45 days – is twice that of other known double neutron star systems.

A paper at Arxiv and accepted for The Astrophysical Journal (lead author Joe Swiggum, a physics/astronomy graduate student at West Virginia University) analyses the discovery and notes that double neutron star systems are important: they provide precise mass estimates for neutron stars.

Those mass estimates are part of how astrophysicists understand a neutron star's evolution, the paper says. 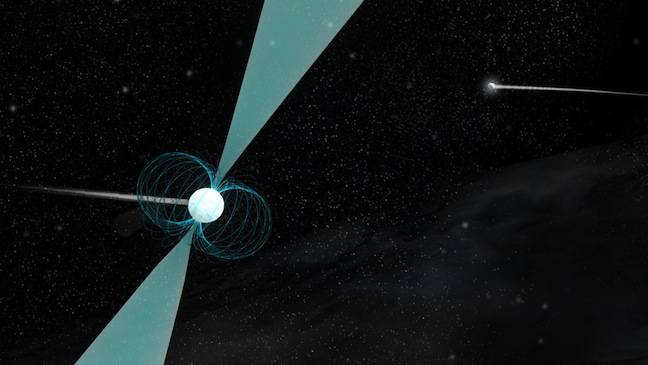 As the National Radio Astronomy Observatory's news release states, hardly any pulsars are known to orbit neutron stars or main sequence stars (like the sun).

“When a massive star goes supernova at the end of its normal life, the explosion can be a little one-sided, imparting a “kick” to the remaining stellar core. When this happens, the resulting neutron star is sent hurtling through space. These kicks – and the corresponding mass loss from a supernova explosion – mean that the chances of two such stars remaining gravitationally locked in the same system are remarkably slim”, the release explains.

The release adds that some double neutron star pairs have orbits the size of the sun and orbital period of less than a day.

In the release, Swiggum says: “The pulsar’s parameters give us valuable clues about how a system like this could have formed. Discoveries of outlier systems like J1930-1852 give us a clearer picture of the full range of possibilities in binary evolution.”

This particular pulsar was identified as part of a binary based on how its spin frequency changed between different observations.

Optical surveys didn't reveal a visible companion to the pulsar, so analysis of the pulse timing is what indicated the large-separation neutron star pair. ®