Dust off your Lovecraft and your Laundry Files, then detour to Mars 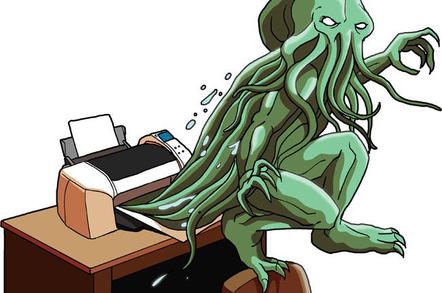 Back in March, we reported on “Blood Falls”, a peculiar spot in Antarctica stained red by hypersaline brine.

Despite being ever-so-salty, the waters that fuel Blood Falls show signs of hosting microbial life. The boffins behind that report reckoned that the pools of brine that leak out from beneath Taylor Glacier to make Blood Falls just about never see the sun. Which is pretty cool given most life can't tolerate that much salt and needs at least some solar energy to get along.

Now that you're up to speed, let's consider a new paper in Nature Communications titled Deep groundwater and potential subsurface habitats beneath an Antarctic dry valley. The paper reports on a mission to survey Taylor Glacier in an attempt to learn more about the brine lakes it harbours.

The results of that effort suggest that the glacier sits atop a fjord-like valley that, as it filled with ice after the Miocene era (about five million years ago), trapped sea water in a series of lakes. The paper's nine co-authors reckon the lakes they were able to probe had liquid water and, while very salty, could probably host the kind of life observed at Blood Falls.

For our next segue, let's remember that in April, NASA boffins announced that Mars hosts sub-surface brines.

News that Taylor Glacier's lakes came from the ocean are a bit of a let-down, because it means the life therein didn't evolve independently of other ecosystems. On the upside, the microbes down there have survived for ages without seeing the sun. Might the same have happened on Mars?

If nothing else, the new finds provide an echo of a sort to H.P. Lovecraft's At the Mountains of Madness, which posited multi-tentacled alien life beneath Antarctic glaciers. Lovecraft's mythos has been adopted by sci-fi writer Charles Stross, who kindly wrote The Register into his 2010 novel The Fuller Memorandum. ®

Particle streams unlikely to come from within the Milky Way