Rocket went up in one piece, came down in pieces 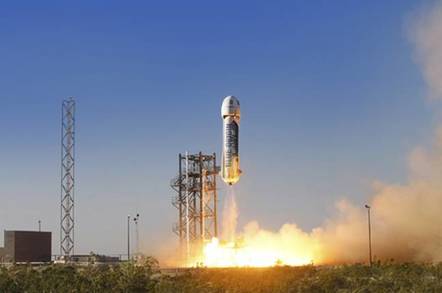 The New Shepard rocket launched from the firm's test site in Texas on Wednesday – although word of the blastoff emerged on Thursday afternoon. It reached its target altitude of 307,000 feet before successfully detaching the empty crew module, which fell back to Earth using three parachutes. The rocket's main stage was supposed to descend gracefully and land in one piece on its own, but unfortunately this failed to happen.

It's not entirely clear what happened to the main stage, but we assume it ended with an almighty bang.

"If New Shepard had been a traditional expendable vehicle, this would have been a flawless first test flight. Of course one of our goals is reusability, and unfortunately we didn’t get to recover the propulsion module because we lost pressure in our hydraulic system on descent," Blue Origins said in a statement.

"Fortunately, we’ve already been in work for some time on an improved hydraulic system. Also, assembly of propulsion module serial numbers 2 and 3 is already underway – we’ll be ready to fly again soon."

The test has shown the efficacy of Blue Origins' liquid hydrogen, liquid oxygen BE-3 rocket engine, which is going to be crucial to the firm's future plans. The United Launch Alliance, which lofts the US military's space hardware, wants to use the BE-3's successor – which is five times as powerful as the BE-3 – for orbital deliveries, now that its supply of Russian engines has been stopped by sanctions.

In the meantime, the BE-3 can be used to give rich idiots the feeling that they have been into space. By firing the crew capsule up passengers can experience free-fall, although they could get much more weightlessness time if they just booked a ride on the vomit comet like everyone else.

Elon Musk's SpaceX team are successfully resupplying the International Space Station, and launching satellites into geosynchronous orbit, although landing a rocket in one piece also remains out of reach for the moment. ®