Inside the world of absolute-zero computing 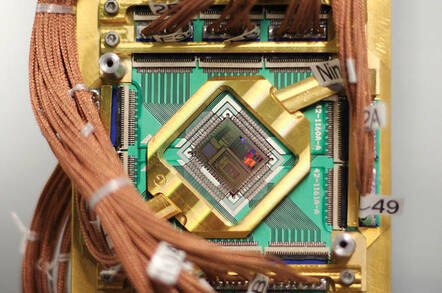 Physics upstart D-Wave has shed some light on its work simulating quantum computer processors to improve their performance and capabilities.

Canada-based D-Wave builds chips made up of 512 superconducting semiconductor circuits called qubits, which are run at ultra-high frequencies in absolute-zero temperatures with minimal magnetic influences. Qubits aren't like normal binary bits: the science is rather mind-boggling, but essentially they're very useful for calculating and storing all possible outcomes of a particular calculation.

The biz continues to bag millions of dollars from investors. Some scientists have described the technology as quantum-like rather than full-fat quantum computing.

"The temperature is about 30,000 times colder than room temperature and the magnetic environment is about 50,000 times lower than on Earth," Jeremy Hilton, veep of processor development at D-Wave, told our sister site The Platform, describing the operating environment of the qubit chips.

D-Wave is using Ansys engineering software to simulate its processor designs, and says it has made breakthroughs in its magnetic shielding. The main headache, it seems, is that the "payload" – the core of the processor – is getting larger while the boffins want to "reduce the magnetic environment further."

"These are multi-physics simulations," Hilton said. "We can separate the chip from the system, in a sense, an there are also different modeling tools from ANSYS around these ultra-low temperatures and magnetic environments as well as for tools to simulate some of what we need around the high frequencies for the circuit design itself."

D-Wave's chips are still very much a work in progress. NASA, Google and others have shown an interest in the tech to perform machine-learning tasks; the overall goal is to produce a supercomputer that can outpace today's processor architectures while using way less energy, even given the incredible amount of cooling required.

You can find the full story, written by The Platform's co-editor Nicole Hemsoth, over here. ®