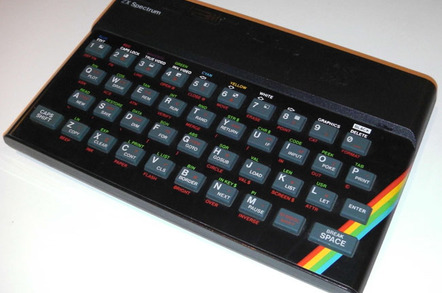 Oxford's Museum of the History of Science have tackled, and solved, a problem posed in the 1982 manual for the ZX Spectrum.

Chapter 19 of that document explains "BEEP", a BASIC command that made the Spectrum emit sounds.

That challenge lodged in the mind of “retro electro media hacker type person” Matt Westcott, who the Museum asked to contribute to a 2014 exhibition called “Geek Out” that, among other things, featured a section on the technology of the 1980s. Westcott was asked to assist with the Spectrum side of things and decided this was the perfect opportunity to take on the Mahler challenge.

A quick look on Spotify suggests the Symphony's four movements run to about 50 minutes of music, making such a program non-trivial.

The video below explains how Westcott and friends met the challenge. If you can't spare the ten minutes to watch it, the TL;DR version is that BEEP can only play one note at a time, so a networked rig of Spectrums (Spectra?) was required to do the symphony justice, with each machine playing one part. The Spectranet interface made it possible to hook a dozen Spectrums into a network, co-ordinated by a Raspberry Pi. Come the hour, the dozen machines each BEEPed their part of the symphony.

The result isn't going to put any orchestras out of business, but is rather lovely if only because the creator of Spectrum Basic, doctor Stephen Vickers, approves.

The video concludes with Vickers saying the project “is fantastic, and gave me great pleasure.”

“If I had known that all I had to do was set a seemingly impossible Spectrum exercise and then, a mere 30 years later, people and Spectrums would band together and carry it out, we could have achieved great things for the world.” ®