Space super-prang at 8,000 MPH – we won't see the hole for a while, crocodile 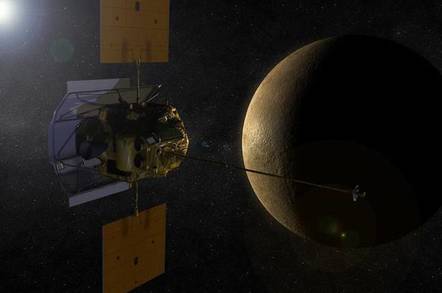 Pic NASA's Messenger space probe has slammed into the planet Mercury at 3.9km per second (8,724mph) – creating the first human-made crater on the innermost planet of our solar system.

Well I guess it is time to say goodbye to all my friends, family, support team. I will be making my final impact very soon.

Launched in 2004, Messenger (aka the MErcury Surface, Space ENvironment, GEochemistry, and Ranging craft) was Earth's first probe to orbit the closest planet to the Sun. After arriving in 2011, it completed 4,104 orbits of the alien world before its fuel ran out and it crashed into Mercury's surface.

(NASA engineers had worked out how to squeeze a bit more life out of the probe by venting helium used to pressurize the fuel tanks to get a bit more thrust, thus keeping it in orbit for a little while longer.)

In the four years to date, Messenger made some astounding discoveries about the strange planet. For instance, in 2012, the craft spotted ice deposits near the surface at Mercury's poles. However, Messenger principal investigator Sean Solomon said during the celebrations of the probe's achievements last week that this wasn't the biggest surprise.

Messenger maps out its own death spot

The probe's instruments found that Mercury is a "volatile-rich planet," containing plenty of chlorine, potassium, sulphur, and sodium. According to today's theories on the development of our Solar System, this shouldn’t be possible, so it's now back to the drawing board for space scientists.

The probe was due to crash into the planet at 1926 UTC (1526 EDT). The impact point is on the far side of Mercury, so we won't get to see the impact site for another nine years; that's when the European and Japanese space agency's BepiColombo orbiter is due to arrive to take a closer look at Mercury. ®