Bloke pepper-sprayed and kidnapped in online ad sting, it is claimed 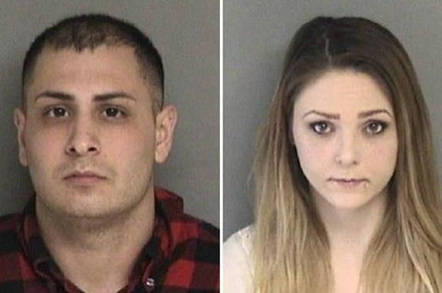 A "test model" iPad was stolen this month from a lonely-heart in his 20s, who is thought to be an Apple worker. The unnamed man had responded to a sex ad online – and got more than he bargained for.

The poor bloke answered an advert from Katherine Stump, 20, and later met up with her and her pal Alexander Nejat, 24, two blocks from his own home in Apple's hometown of Cupertino, California, police say.

They drove to his house, and once inside, Stump allegedly pulled a knife on the man. Nejat also pepper-sprayed him in the face, it is claimed.

The couple then robbed the bloke of a number of electronic devices, prescription drugs, and $7,500 in cash, it is alleged, and what he later reported to the police was "a test model iPad from Apple." It is not clear if the tablet is a prototype of a forthcoming model, or an old device.

After cleaning out the joint, Stump and Nejat forced their victim into their car, drove him nearly a mile from his house, and released him, it is claimed.

Down the rabbit hole

The robbed man reported the theft five days later, and officers put together a composite sketch of the alleged assailants, and sent it to all police departments. Detectives in the city of Pleasanton 40 miles away recognized the pair as individuals they had arrested earlier for a similar alleged robbery.

According to the San Francisco Chronicle, Detective Brandon Stocking tracked down Stump and Nejat while investigating an alleged robbery of a man who responded to an ad on Backpage.com for a male escort.

In that case, the victim reportedly paid Nejat $150 while outside a Pleasanton hotel but when no rooms were available, he asked for his money back. In response, Nejat pepper-sprayed him in the face and left, it is alleged.

Det Stocking later found a Craigslist ad for a tablet computer that used the same telephone number as the Backpage ad, and arranged to meet the slab's sellers at the Stoneridge Mall in Pleasanton.

Stump accompanied Nejat to the shopping center as a getaway driver, where the detective detained them both, we're told. Det Stocking got then hold of their cellphones that showed the pair has been posting prostitution ads and then robbing those who responded, according to the officer's testimony in court documents.

When the detective saw the Cupertino victim's photofit, he immediately recognized Nejat, who was still the cells, and rearrested Stump, we're told.

Nejat, from Haven Plane in Dublin, and Stump, from Merano St in Danville, both in the East Bay, have been charged with second-degree robbery. They also face charges of kidnapping, first-degree robbery and making criminal threats. Nejat has prior convictions for child abuse and assault with a deadly weapon.

When Pleasanton police arrested the pair they had several phones and computers on them that detectives suspect belong to other victims who have not come forward. None of the items came from the Cupertino robbery, and the prototype iPad has yet to be recovered.

A spokesperson for Apple was not available for comment. ®