Your new car will dob you in to the cops if you crash, decrees EU 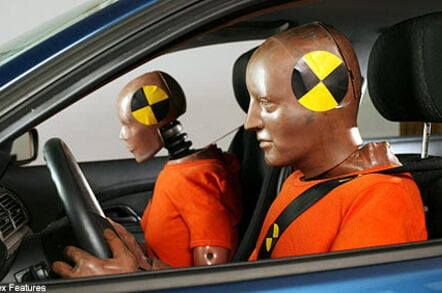 "I say, old boy, is this really necessary?"

New cars sold in the EU from March 2018 will have to phone the authorities if they think they've been in a crash.

A watered-down version of the eCall proposal has found favour with the EU Commission, meaning when a car or light van crashes, it will automatically summon the emergency services.

It will use the emergency number of 112 (the European equivalent of 999) which does not require an active mobile phone connection.

Fears over privacy – not least what speed drivers were doing and where – have previously led to eCall being kept off the statute books, so now only the most basic of information will be transmitted. It will send the location, type of vehicle, fuel used and time of accident.

The system is triggered by the same sensor as an airbag. However, while Brussels is saying the eCall system is mandatory, not all cars have airbags, so the €100 estimated price of the hardware misses out a major component on a number of cars.

The move to introduce the legislation was led by Czech MEP Olga Sehnalová of the Progressive Alliance of Socialists and Democrats (S&D Group), as a cross-party proposal. Sehnalová said: “Quicker response from the emergency services to accidents on roads across Europe could save about 2,500 lives in the EU every year. The severity of injuries will also be considerably reduced in tens of thousands of cases.”

To address the privacy requirements, Sehnalova said: "We ensured that the vehicles equipped with 112 public eCall are not traceable and are not subject to constant tracking. In fact, the device will upgrade the data constantly and keep the minimum information required to handle the emergency calls."

S&D Group spokeswoman for the internal market and consumer protection, Evelyne Gebhardt, added: "The S&D Group were the leading force in ensuring an EU-wide public eCall service based on the 112 emergency number, available free of charge to everyone."

The accident-grassing tech will contain a dormant SIM which will be woken up by the jolt of the accident and then log on to the strongest nearby mobile network, using either a 2G or 3G connection. This will send the minimal data to the accident unit run by whichever mobile network it has logged on to. The occupants of the car can then make a voice call to an operator at the call centre.

The eCall service has been a political football for the best part of ten years, with the Greens feeling that providing too much data could be the thin end of the wedge for commercial exploitation by insurance companies and other evil commercial organisations.

The Greens also felt that a system promoting accident rescue is the wrong approach and the emphasis should be on safer driving.

Other reservations revolve around the technology only currently being made by BMW, with some elements supplied by Qualcomm. In practice, however, with nearly three years until the deadline, there will be plenty of other manufacturers in the fray by the time it goes live. ®

Robot cars will kill London jobs – but only from 2030, say politicans

London mayor: Self-driving cars? Not without jacked-up taxes, you don't!

And who will build the roads, asks Transport for London