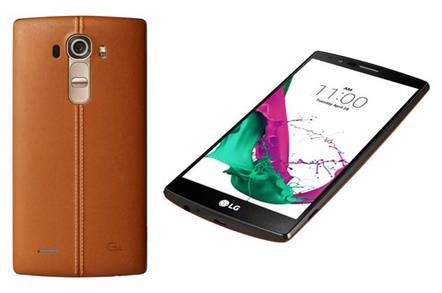 LG has whipped out its latest Android 5.1 smartphone, the G4, and pledged that the handset will burst upon an astonished USA within the next few months. It will be available with a ceramic or real leather backplate.

The new smartphone looks remarkably similar to its G3 predecessor. It's got a 5.5-inch QuadHD (1440p, 538dpi) screen, and is slightly curved to fit better in the hand. The G4 is, however, unique in the field because it has eschewed the eight-core SnapDragon 810 in favor of the 1.8GHz 64-bit ARM-compatible hexa-cored 808 processor. That'll be the 810 that's apparently prone to overheating.

The 808 has two ARM Cortex-A57s, which power up when lots of oomph is needed, and four Cortex-A53s that run the show otherwise. The builtin GPU is an Adreno 418.

"LG and Qualcomm Technologies collaborated from the initial stages of the Snapdragon 808 introduction to skillfully tune the technologies to make many of the LG G4's unique features possible," said Reiner Klement, VP of product management at Qualcomm.

The processor choice may have been affected by reports that the more powerful 810 processor is suffering from heating issues. Multiple users have reported that the SoC runs very hot, then scales back performance to cool down, resulting in a handset that's both expensive, warm, and slow.

"Our objective with LG G4 was to create a smartphone with the optimal balance of performance, functionality, efficiency and design innovation," said Dr Ramchan Woo, head of smartphone planning at LG. "By working closely with Qualcomm Technologies on the LG G4 smartphone, we were able to deliver on this high bar of innovation that both companies set."

The CPU core configuration – ARM's Big.Little architecture – will give a slightly better battery life, and the 3000mAH unit should give 20 hours of talk time or around 10 hours on the web, we're told. The battery is also removable so you can swapping a new unit, or remove it altogether if you're paranoid about the NSA listening in.

Inside the G4 is the usual grab-bag of goodies – NFC pad, 802.11 a/b/g/n/ac WI-FI, Bluetooth 4.1, and the device runs Google's Android 5.1 operating systems. The G4 also has a microSD card slot, something that's very popular with Reg readers, if forum comments are anything to go by.

The handset comes with 32GB of storage and 3GB of RAM, which should be enough for most purposes. The rearward camera is an excellent 16-megapixel device, with a better-than-usual eight megapixel forward-facing camera.

Pricing will depend on the contract agreed with individual telcos, but is expected to be nothing too expensive. Whether or not the handset can woo buyers away from Apple, Samsung and others remains to be seen however. ®