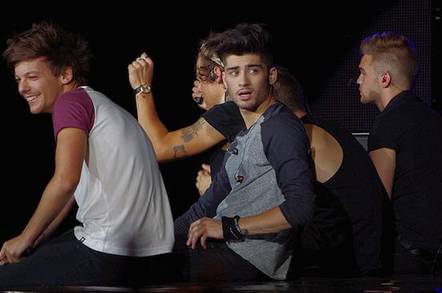 Zayn? Are you out there, somewhere? Image credit: TheMikeRob.Tumblr.com/PicktureThat.com

It turns out there's more than one direction One Direction could be heading in, after megaboffin Stephen Hawking comforted fans with the claim that Zayn Malik may still be in the band in a parallel universe.

The theoretical physics professor was beamed via hologram from Cambridge, England to the Sydney Opera House in Oz to respond to a question from a miserable One Directioner.

"Finally, a question about something important," he joked.

The British prof then added: "It would not be beyond the realms of possibility that somewhere outside of our own universe lies another, different universe and, in that universe, Zayn is still in One Direction."

He advised "any heartbroken young girl to pay attention to the study of theoretical physics because, one day, there may well be proof of multiple universes."

Which is a bit of a disappointment, really. Is this how one of the world's best scientific minds sees things? The only way to get a girl interested in physics is by using a pop star as bait? Tsk. Away with you, Hawking. Leave the gags to Stephen Fry next time ... or, on second thoughts, maybe don't.

It seems only right to paraphrase the great Douglas Adams here. There are two things you should remember when dealing with parallel universes. One Direction's not really parallel, and two, Zayn's not really a universe. ®

Hawking and friends: Artificial Intelligence 'must do what we want it to do'

Rise of the Machines *Cough* Don't enslave us *cough*