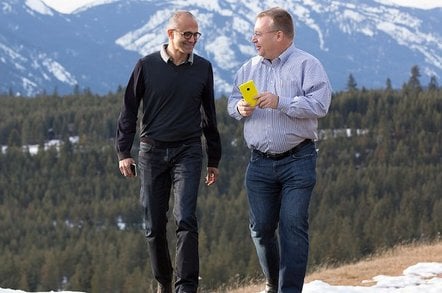 A judge with the US International Trade Commission has ruled that Microsoft's Nokia handsets violate patents held by trolling outfit "non-practicing entity" InterDigital, adding to the software giant's ongoing woes in the mobile phone arena.

Reuters reports that ITC Administrative Judge Andrew Essex found on Monday that Nokia-branded handsets infringe two patents, in the latest round in a war that has dragged on between Nokia and InterDigital since at least 2005.

InterDigital has asked that Nokia handsets be barred from import into the US should Microsoft be found guilty of infringement, and Judge Essex said in his Monday finding that it would not be against the public interest to enact such a ban. No such action can be taken, however, before Judge Essex's ruling is reviewed by the full commission.

Microsoft/Nokia hasn't been the sole target of InterDigital's wrath. The firm, whose sole business is licensing its patent portfolio, has also filed patent lawsuits against Huawei, Samsung, and ZTE. Yet an unfavorable ruling could be particularly problematic for Redmond, which is already struggling to prop up the wobbly mobile phone business it bought from Finland's Nokia in 2014.

The bottom line is that Microsoft's phone hardware business isn't profitable. That much was revealed in its most recent quarterly earnings report to the US Federal Trade Commission, which it filed last Thursday.

According to that filing, Microsoft's phone hardware biz lost $4m in the third quarter of its fiscal 2015, on revenues of $1.4bn. The software giant says it sold 8.6 million Lumia handsets and 24.7 million non-Lumia ones. That means it lost 12 cents per device it sold, on average.

Not that such losses shouldn't be expected. Mobile hardware is a tough, highly competitive business. Microsoft lost money on every Surface fondleslab it sold, too, until finally getting its tablet division on the right track with the Surface Pro 3.

But while Microsoft created its Surface business from scratch, Nokia's devices and service business arrive at Redmond a going concern with many years in the market already under its belt. To hear that it's losing money now – despite all of Microsoft's layoffs – is troubling, to say the least.

Especially worrying is the caution buried in Microsoft's latest financial report warning investors that it may need to take a goodwill impairment charge on its phone business if things don't get turned around.

"Phone Hardware did not meet its sales volume and revenue goals, and the mix of units sold had lower margins than planned," Redmond's bean-counters wrote. In other words, Microsoft's Nokia-branded dumbphones and cheapo Lumias are selling, but higher-end models are not.

As a result, Microsoft warned, the phone business is at an "elevated risk of impairment" – meaning Redmond may need to write down some of its value in a future quarter – should anything happen to reduce future cash flows or unit growth rates.

It should therefore go without saying that an injunction from the ITC over InterDigital's patent lawsuit is the absolute last thing that Microsoft's phone biz needs now. ®

InterDigital's chief communications officer Patrick de Wille has been in touch to say that his company develops "90 per cent" of its patents in-house with 200 of its own engineers, and it is a standards licenser rather than a patent-acquiring troll.