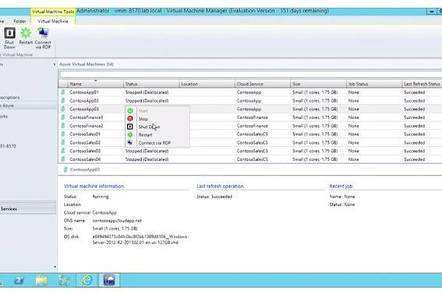 Some of the VMs on the list above are in Azure, some are on-premises. Exciting, huh?

Update Rollups are badly-named these days, because Redmond now slips in small features to the products that get a rollup when the packages land on the last Tuesday of a calendar quarter's first month.

This week, VMM users are slated to get something interesting, namely the ability to detect and control Azure virtual machines from within VMM. The addition of that feature means sysadmins whose empires include on-premises and Azure can start, stop, restart or connect to Azure VMs over RDP, all from within VMM.

Microsoft's stopped short of allowing admins to create Azure VMs from within VMM: you've still got to log in to Azure to spin up a new machine. The addition of basic VM controls for Azure will, however, save sysadmins a little hassle and advance Microsoft's hybrid cloud capabilities.

The Update Rollup will also add the ability to handle Generation Two VM templates, which should help PaaS deployments, and improved virtual network interface card monitoring to help with chargeback.

Adding new features to the likes of VMM every quarter is not consistent with Microsoft's decision to hold back new features for the likes of Exchange and SharePoint. Updates to those two servers have been delayed and, when they arrive, won't do much more than roll up features already present in their cloudy editions. System Center and VMM users are, it seems, considered more deserving of attention by Microsoft. ®