Search for little green men finds them rather close to home 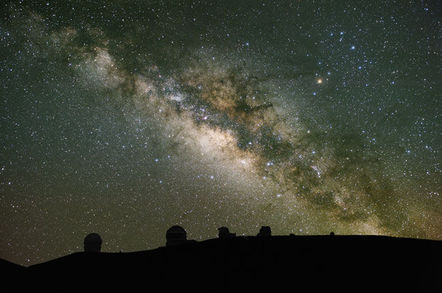 A cyber attack downed the Hawaiian Thirty Meter Telescope (TMT)'s official website for two hours in protest against the construction on Mauna Kea.

A group called Operation Green Rights, claiming to be affiliated to Anonymous, launched a primitive DDoS attack on the TMT and Hawaiian government sites, posting trophy screen grabs to its blog along with the statement: “Nothing will ever justify the destruction of ecosystems; filthy money can never replace them. Stand with the Hawaiian natives against #TMT”.

As well as being a blissful paradise, Hawaii has become a native habitat for large telescopes, being located well away from the light and radio pollution of much of the developed world.

There are 13 telescopes on the island of Mauna Kea but work to build the TMT, billed as the world’s most advanced ground-based optical, near-infrared, and mid-infrared observatory, has led to protests.

The “filthy money” the protestors have set themselves against includes its rent, which will rise to $1m a year for the land the telescope itself will stand on. It will employ around 140 people, with significantly more being employed during construction.

Operation Green rights asserts the project is “ecocide” and that it abuses “native” people's rights. The TMT organisation, however, claims that the site was chosen on the basis that it was well away from anything of cultural and architectural significance, in an area where there are no endangered “plants or bugs”.

Previous protests have taken the form of poetry, dance, visual art and other mele aloha ‘aina (protest songs expressing deep love for the land), but the cyber attack is a new strategy. The attackers claim affiliation to Anonymous, although neither Anonymous’ main Twitter feed (@YourAnonNews) or its Tumblr site mentions the TMT.

With construction expected to take 8-10 years, the telescope is a long way from looking for little green men – but has certainly found plenty of them nearer to home. ®