Keep your eye on the OpenStack summit 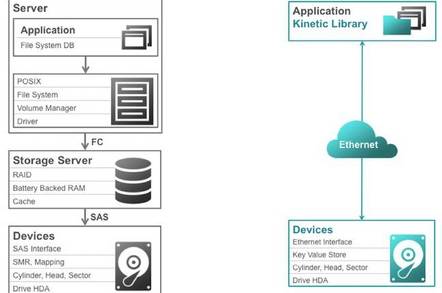 Seagate will hand over some of its Kinetic Storage platform to the world at the coming OpenStack summit in Vancouver, Canada, The Register has learned.

Kinetic is the object storage platform Seagate has built to make it possible to so useful work with its Ethernet-equipped disk drives. Seagate's ambition is to cut arrays out of the loop, allowing software to talk directly to disks instead of having to do all that pfaffing about with storage area networks. By cutting arrays and file systems out of the loop, Seagate reckons it can save users some cash and also speed things up.

Seagate already publishes some libraries and other other developer resources, but appears to have come to the conclusion that radical re-architecting of infrastructure and applications isn't the sort of thing that happens when a technology's inventor holds all the cards.

Sources close to the company told The Reg that late May's OpenStack shindig will see the company name the licence it's picked and participants who will work on the platform. Official hints may arrive in the next week or three to help you, and us, guess those details.

Kinetic's doing alright in its current form: Seagate can point to CERN and the likes of SuperMicro and Dell have signed up to make the specialist disk chassis required to hold and connect the Ethernet-equipped drives to the world. But competition in scale-out object storage is hotting up, because everyone in the storage industry is looking to help telcos, financial services outfits and other hyperscale operators find a way to store the colossal mass of stuff we're all creating. Seagate therefore needs more friends to give Kinetic a chance at winning some of that business. And now we know it has a plan to find them. ®