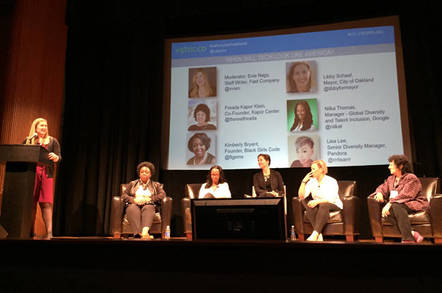 It's rare that the politician is the most blunt person in the room, but Oakland's Mayor Libby Schaaf pulled it off on Thursday afternoon at the Vator Splash tech conference in the city.

Taking the stage to discuss "when will tech look like America?" the mayor shared her thoughts on how to increase diversity in the tech industry. She was joined by an all-female crew from Google, Pandora, Fast Company, and Black Girls Code.

Those thoughts included David Eggers' dystopia The Circle, which describes a California Google-Apple-ish social media company-village-cult that dominates its employees 24 hours a day, seven days a week. Its motto is "sharing is caring."

"The Circle just scared the shit out of me," Schaaf relayed, criticizing the tech industry's tendency to build self-contained campuses with free food and bus rides. "I mean, no offense," she said to Google's Manager of Global Diversity and Talent Inclusion, Nilka Thomas.

No, Bring Your Own Lunch

Schaaf's point was supported by Pandora's Senior Diversity Manager Lisa Lee, who said her music-streaming service does not provide food to staff in order to get its techies to go outside and "support local businesses."

"Do we lose candidates over it? Absolutely," she said, adding that one job candidate turned down a position because he wanted a staff cafeteria ("I don't want to spend too much time deciding on my food choices," Lee relayed as his explanation.)

As it turns out, Google is planning to start some kind of program in Oakland to increase its diversity after its self-proclaimed miserable failure to hire people that aren't white, male, and from Ivy League universities.

Oakland, it seems, is the place to be to study diversity: Black Girls Code's Kimberly Bryant said she set up in Oakland despite living over the water in San Francisco. And Kapor Center founder Freada Kapor Klein – who gave a quick talk of diversity and how to get more non-white non-men into tech jobs – also chose Oakland as the place to set up.

As for Pandora, based just around the corner from the Kaiser Center in downtown Oakland, "our founders have been quite upfront about the fact that if Pandora had not been in Oakland it would probably have been just one more failed company in Silicon Valley."

But back to Mayor Schaaf and her swearing. "I'm a big believer in the power of internships," she said, telling the story of how she met "the best intern I've ever had", an African-American man called Anthony Wilson.

"You know a lot of people want to intern in the mayor's office, and people I know will ask, 'Can my child can intern there?' Well I was walking down 19th and Telegraph and I saw him drop a candy wrapper. So I said, 'Excuse me, look how beautiful this city is; it looks so much nicer without trash on the ground.'

"And I thought he was about to give me a, you know, 'Fuck you, bitch,' but he was instead 'Ma'am, I am so sorry, you are absolutely right.' And one thing led to another, and next thing I know he is interning in my office." As it turned out Wilson was, unknown to Schaaf, actually in the audience.

Strikingly, it is this welcoming culture that all the panelists agreed was important to preserve in Oakland as an apparent wave of tech investment heads over the Bay from San Francisco and Silicon Valley.

"I am hopeful that Oakland can create a different tech ecosystem," said Freada Kapor Klein. "And that it puts out a call for startups that address real problems that people face. We don't need any more photo sharing apps."

Black Girls Code's Bryant noted that many of the positive aspects and histories of Oakland were also present in San Francisco – where she continues to choose to live – but that "San Francisco has changed dramatically in the last seven years and much of that has come from tech. In Oakland, I want to see the community be a part of the change."

With the boom comes higher prices: Oakland now has the second highest rate of growth for rent in America, Schaaf noted. "My fear, my challenge, what keeps me up at night is how to avoid the ills of gentrification," Schaaf told the audience. "We have an opportunity that prosperity brings. I am hopeful it is coming and will benefit the people that already live here."

The mayor, who had earlier refused to explain her nickname of "Girl Scout Barracuda", has a plan: a housing roadmap. It will be out by the end of May. ®

What do you think? Post away in the forums, or drop us an email.