Licence to chill: Ex-CIA spyboss Petraeus gets probation for leaking US secrets to his mistress

Slap on the wrist for his Thunder-balls-up 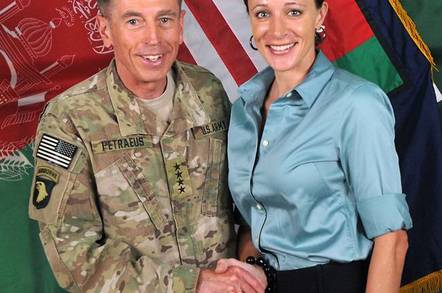 Cloak and shag her ... David Petraeus and Paula Broadwell

General David Petraeus – the former head of US forces in Iraq and Afghanistan and briefly the head of the CIA – has been sentenced to two years' probation and fined $100,000 after admitting leaking America's secrets to his lover.

Married Petraeus, 62, handed over military logs containing classified material to his official biographer, and mistress, Paula Broadwell. He also lied to FBI agents during their investigating into the case, and faced charges that could have put him behind bars for up to five years.

But in March he pleaded guilty to a single misdemeanor of unauthorized removal and retention of classified material in a bargain with prosecutors to avoid a stretch in the big house. The US government's lawyers recommended a $40,000 fine, but Magistrate Judge David Keesler raised that to $100,000 in light of the serious nature of the offense.

"Today marks the end of a two-and-a-half year ordeal that resulted from mistakes that I made," Petraeus told Reuters. "As I did in the past, I apologize to those closest to me and many others."

Petraeus handed over the logs, known as "black books," to his lover while she was writing the book of his life. The files contained classified military code words and reports, although she added none of them to his biography All in: The education of David Petraeus.

The leak only came to light after the FBI was called in to investigate a case of email harassment against Jill Kelley, a friend of Petraeus. The feds traced the threats back to Broadwell, who admitted her affair, forcing Petraeus to resign from his job as head of the CIA barely a year into the job.

Petraeus, who is now chairman for the private equity firm Kohlberg Kravis Roberts, will have to make regular visits to a probation officer for the next two years. The misdemeanor charge means he won't suffer any more comebacks from his fall from grace.

Which contrasts sharply with the case of Private Chelsea Manning, who also disclosed classified military and diplomatic memos. Manning is serving a 35-year sentence in a military prison for leaking several thousand documents to WikiLeaks.

"A slap on the wrist is the most one could say about what can barely be called a sentence for what could have been treated as serious crimes including espionage," said Michael Ratner, a lawyer representing WikiLeaks founder Julian Assange™. ®