Something's missing in our universe: Boffins look into the SUPERVOID

Much ado about nothing much 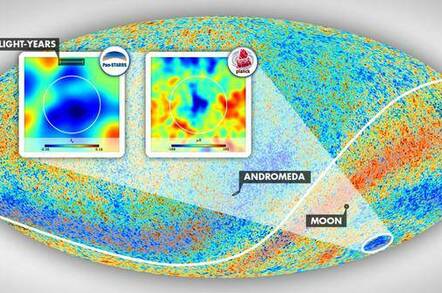 The biggest structure in the Universe has astro-boffins a-twitter because there's less stuff in it than there should be.

If you pop over to the Monthly Notices of the Royal Astronomical Society you'll find the snappily-titled Detection of a supervoid aligned with the cold spot of the cosmic microwave background, which explains the fuss.

With a span of an astonishing 1.8 billion light-years, the spherical supervoid is the largest structure humans have described so far – and in large-scale terms, it's pretty empty.

The supervoid could, astrophysicists say, provide evidence for dark energy, and perhaps support the notion that the universe is expanding at an accelerating rate.

The story starts with a “cold spot” in the cosmic background radiation, first identified in 2004. While the cold spot suggested the area might be empty, previous surveys hadn't identified a void in the area anywhere near our own galaxy.

By cold, the boffins mean really cold, with a temperature measured at 70 micro-Kelvin (compared to 2.7 K of the cosmic background radiation's - CMB), and until now, speculations had included some kind of exotic physics, some kind of red-shift Sachs-Wolfe effect, or a mere statistical fluke. 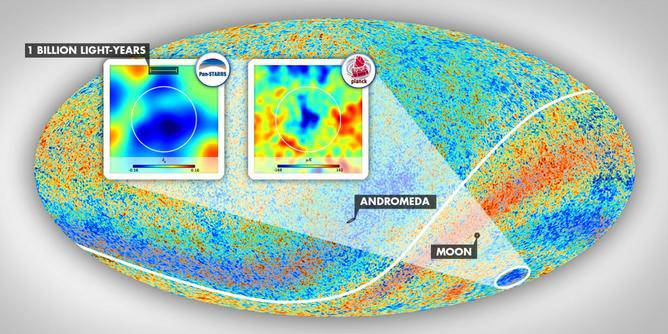 As explained at The Conversation, the normal variation of the CMB is just 18 micro-Kelvin.

That motivated a new search, led by István Szapudi of the University of Hawaii at Manoa, using the Pan-STARRS1 telescope and the NASA WISE satellite.

What Szapudi's group found was that in the 1.8 billion light year diameter area, there are 10,000 fewer galaxies than expected – not really a hole, but still 20 per cent lower mass density in the region than is normal for such a large area.

The supervoid won't be the end of the cold spot investigation. Professor Carlos Frenk of the University of Durham, whose earlier work on the cold spot is cited in the supervoid paper, says Szapudi's work still only accounts for about 10 per cent of the region's coldness. He told The Guardian: “It’s like the Everest of voids – there has to be one that’s bigger than the rest, but it doesn’t explain the whole Cold Spot, which we’re still in the dark about.”

The low mass helps explain the low observed temperature of the cold spot. Crossing the region, CMB photons lose energy (observed as a longer wavelength, which corresponds to the cooler temperature) by converting kinetic energy into gravitational energy.

Were the universe regular, those photons would recover energy from other mass exiting the region; the shortage of mass means the energy isn't recovered.

That's what links the supervoid to the possible acceleration of the universe's expansion: over the 1.8 billion years between ingress and egress, the universe around the photons became less dense, leaving less stuff to give the photons back their kinetic energy.

The acceleration of the expansion is put down to dark energy, Frenk told The Guardian: “This is independent evidence, in case anyone doubts it, for the existence of dark energy.” ®

Big Bang left us with a perfect random number generator

GRAV WAVE DRAMA: 'Big Bang echo' may have been grit on the scanner – boffins

The universe before inflation took hold