America was founded on a dislike of taxes, so how did it get the IRS?

From Cambridge to the other Newark, via the valley of bureaucratic hell 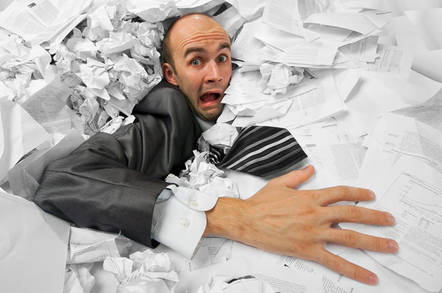 The eXpat files Welcome again to the eXpat files, our now-occasional visit with readers who've moved to a new land in search of adventure, sunshine and, in the case of this week's chap, bewildering and labyrinthine tax and credit regulations.

The chap in question is David Hough, currently resident in Newark, California (not New Jersey). David's just ticked past fifty, and his expat experience has been eased by his deep familiarity with the USA. Or so he thought, until he started buying houses and paying taxes.

The Register: What kind of work do you do, and with which technologies?

David Hough: Electronic hardware design, general engineering rather than specialising, so each job has pretty much been a move into something new.

The Register: Why did you decide to move to the USA?

David Hough: A few years back I got a chance to spend nine months in the US with my family helping start the US office of my then employer, which I regard as my "free taster session" for life in the US, and which gave us chance to see what it would be like living here.

My wife and son are both US citizens, so it was only me who needed a visa. As for coming back, my son is home educated (UK term) and we were impressed by the resources for homeschooling (US term) in the Bay Area for teenagers, so that played a part in the timing.

There is a whole other story, also related to home education, behind why we were prepared to have my green card application in the post had Labour won the last election, but as they didn't, so we took our time with the paperwork and I got the immigrant visa early in 2013.

The Register: How did you arrange your new gig?

David Hough: I got this one courtesy of my previous US experience. My old US boss recommended me to the company, a couple of former colleagues were also working there, so I had a phone interview before flying out for an in-person interview.

Not quite a day trip to San Francisco, but pretty close.

Six weeks later I was out here starting the job. I'd made quite a few other applications too, but mostly never got a response from them. My guess is that they saw the UK address and the application hit the circular file without reading any further.

I'm not quite as adventurous as those who just fly out and then start looking, so I was prepared to stay in the UK job until I got an offer or until it was getting close to a year since I'd last been in the US (at which point the green card shrivels up).

The Register: Pay: up or down?

David Hough: Up, almost double the UK, but then it's not a cheap area to live around here, with house prices scary compared with the UK or even other parts of the US.

The Register: How do workplaces differ between the UK and the valley?

David Hough: To be honest, day to day it isn't much different. I've seen the 'at will' employment in operation, people have departed at very short notice, some jumping, others pushed. For a while there was the novelty in seeing all those well-known names such as Google, Facebook, Yahoo, and the lesser-known names such as Marvell, TI, Broadcom, but that wears off once you've driven past a few times.

The Register: Will your expat gig be good for your career?

David Hough: Time will tell. When people ask when I'm coming back to the UK I just say there isn't a defined end date at the moment.

The Register: What's cheaper in the US? What's more expensive?

David Hough: Petrol is a lot cheaper. I filled up the car this morning and thought the pump had glitched when it stopped at about US$24 before realising that it had indeed managed to dispense ten gallons. When I first got here, that would have been just under US$40.

Housing is a lot more expensive — you're probably looking at at least half a million dollars for a fairly small property over on the east side of the bay, with the same thing in the areas around Google and Facebook likely to be a couple of million.

There's a one per cent annual property tax on that, too, so a $2 million house means you're paying the State of California $20,000 a year to own it. Mansion Tax, anyone? Rental is worse, it'll cost you more than a monthly mortgage payment, although you don't need such a large down payment.