US Navy's LOCUST DRONE CANNON is like death SWARMED up 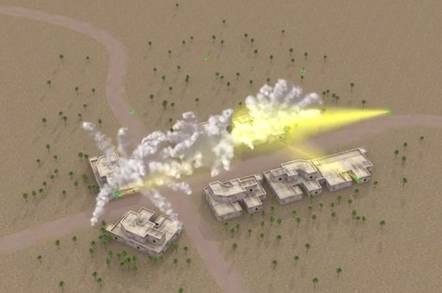 Vid Drones are going to play a big part in future conflicts, and the US Office of Naval Research (ONR) knows it.

The boffinry nerve-center has been showing off its latest idea – the Low-Cost UAV Swarming Technology (LOCUST) that will throw massive swarms of networked aircraft into the skies to search for the enemy.

LOCUST can fire up to 30 flying drones into the air in quick succession, and these are interlinked wirelessly and directed by a shipboard controller. They can be used to coordinate attacks, carry out spy missions, and you get the idea.

"The recent demonstrations are an important step on the way to the 2016 ship-based demonstration of 30 rapidly launched autonomous, swarming UAVs," said ONR program manager Lee Mastroianni.

"This level of autonomous swarming flight has never been done before. UAVs that are expendable and reconfigurable will free manned aircraft and traditional weapon systems to do more, and essentially multiply combat power at decreased risk to the warfighter."

The drones, each named Coyote, are loaded into a Navy-standard sonarbouy launcher with their wings and tail folded. These snap into position after firing, and the propeller-driven drones can fly at 85MPH and have a range of 20 miles from their controller.

ONR claims the LOCUST system is also low-cost; hundreds of Coyotes will be cheaper than "a tactical aircraft," we're told. That's not exactly hard – US military toy sets aren't exactly cheap. Each F-35 white elephant multi-role fighter will cost hundreds of millions of dollars, once they're ready.

The video accompanying the announcement shows the drones encircling a small hypothetical village surrounded by palm trees, and directing bombs to smash the hell out of some houses while leaving others unscathed. Iranians may want to take note. ®