Scrawl-ware does 82 languages, @s and "quotes" 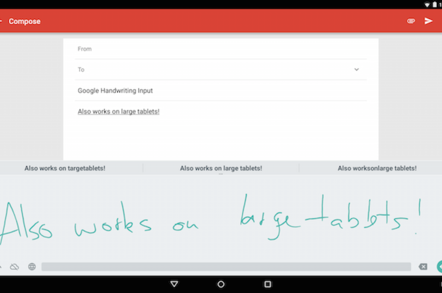 First Look Google has popped the lid off its Google Handwriting Input, new Android software that lets you input your text longhand in any 'droid app.

The Chocolate Factory's research arm says handwriting recognition is needed because touchscreen keyboards remain modestly effective and while “Voice input is an option, but there are situations where it is not feasible, such as in a noisy environment or during a meeting.”

The app works in 82 languages and offers the chance to swap to other input methods.

Pretty well, I found, after installing in on a Galaxy S5. I have shocking handwriting, the legacy of a post-childhood-injury left-to-right-handedness conversion and a resulting predilection for keyboard use. The app had no trouble with my scrawl even when I made just-more-than-minimal effort to form letters elegantly. When I really let myself go, the app couldn't figure out what I'd scrawled. But neither can I, at my worst.

I found I wanted to write in the centre of the writing area, which was a problem because it left me without enough space in which to finish a word. The app scrolls letters it has interpreted out of sight to the left, but not quite fast enough to leave enough space for comfortable writing.

On a larger screen, this won't be a problem. With a stylus that enables faster input than a finger, it might be.

Installing the app and getting it working won't trouble anyone with even passing familiarity with Android. The app asks a couple of questions, downloads language packs and is then available as an input option across Android. Recognition of characters like quotation marks and the @ symbol was spot on.

Overall, it's pretty impressive. Whether there's a genuine need for handwriting recognition is another matter. Just why one would write instead of using an on-screen keyboard in a meeting is anyone's guess: you'll obviously be giving your device more attention than those in the room with either input method.

My gut says that on smartphones, the small writing area will mean typing is faster, but that on tablets and phablets – especially those with styli – Google might just have a winner here. Even if the app doesn't become a hit, Google has added a big feature to Android without an upgrade of the OS itself (although you need at least 4.03 to run it), a reasonably neat trick.

Google has prior form in this area, having previously introduced scribble-cognition (in 50 languages) for laptops. ®