Tech land needs to do more to distance itself from mass immigration debate, says CEO 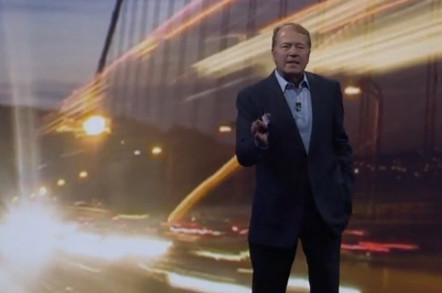 Cisco CEO John Chambers says the tech world has to win over the American public if it wants the US government to issue thousands more H-1B work visas to foreign nerds.

H-1B visas are like Willy Wonka's golden tickets: about 85,000 a year are granted to skilled foreigners – such as software engineers and other techies – allowing them to live and work in America for a couple of years or possibly longer. In 2015, about a quarter of a million people tried to apply for one in the space of seven days.

Speaking today during a panel discussion held by Washington DC startup incubator 1776, Chambers suggested that efforts to widen the H-1B program are getting lost in the larger and more contentious debate in the US over immigration.

If technology goliaths were able to put across "the facts" about an expansion of the H-1B system in a way that doesn't portray it as simply throwing open the borders, Chambers said, US citizens would be more willing to accept it. And if that happened, government policy makers will follow along too, apparently.

"We have to be realistic. Part of the reason were not getting through is that it's being held hostage to a larger immigration bill. This is where we have got to be effective on how we create a win-win," Chambers said. "How do we educate the American people, who I think are really crisp once you give them the facts on making the right decision."

The comments come as enterprise and consumer technology companies continue to push in Washington DC for an expansion of H-1B employment visas. STEM has been a particularly high-demand area for H-1B workers as companies claim US universities simply aren't producing enough qualified graduates.

The shortfall is hurting their ability to expand and provide jobs for Americans in other areas, it's claimed. The cynical among us suggest foreigners are more than willing to work in the US on lower wages than citizens will accept, cutting Americans out of jobs and saving bosses a pretty penny.

Fellow panelist John Doerr, of VC house Kleiner Perkins Caulfield Byers, believes the limit should be all but abolished.

"Staple a green card to the diploma of every foreign national who graduates with a technical degree," Doerr said. "The national strategy has been to welcome these people to our great Universities and then they have to go back. What kind of strategy is that? It is brain dead." ®

Good old-fashioned hardware-defined networking growing like topsy Down Under