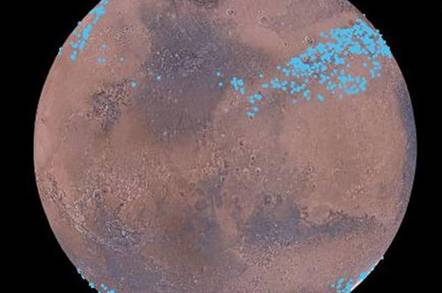 Hard on the heels of news from the Mars Reconnaissance Orbiter that Mars could have extensive sub-surface glaciers, Curiosity Rover has gone a step better and found evidence of “transient” liquid water.

It's neither pure enough nor (as a liquid) plentiful enough to support life, but it's still enough to get the boffinry quietly throwing hats in the air.

It follows results from two years ago, when Curiosity first started scooping stuff into its analytical cake-hole. Back in 2013, the rover found H2O in dust samples, but that would have been frozen when it was sampled.

The new research, described at Nature (abstract here), finds that the presence of dissolved perchlorate salts lower Mars-water's freezing temperature just enough to allow it to exist as a liquid brine.

The rover's samples at the Gale Crater, the paper says, show conditions that “support the formation of night-time transient liquid brines in the uppermost 5 cm of the subsurface that then evaporate after sunrise”.

Moreover, “changes in the hydration state of salts within the uppermost 15 cm of the subsurface, as measured by Curiosity, are consistent with an active exchange of water at the atmosphere–soil interface”.

El Reg isn't in the in-crowd that gets “partner access” to the Nature paper like The Guardian, so we'll have to rely on that august journal for word from Mars scientist Morten Bo Madsen of the University of Copenhagen.

“The soil is porous, so what we are seeing is that the water seeps down through the soil. Over time, other salts may also dissolve in the soil and now that they are liquid, they can move and precipitate elsewhere under the surface,” Bo Madsen said.

Not only would the water be too chilly for <cliche>life as we know it</cliche>, the Red Planet's lack of protection against radiation would make things difficult even for extremophiles, the boffins reckon.

But it's becoming increasingly clear that water is quite abundant on Mars. As the paper's abstract states: “Perchlorates are widespread on the surface of Mars and we expect that liquid brines are abundant beyond equatorial regions where atmospheric humidity is higher and temperatures are lower”. ®