The real scandal? Who in their right mind used an IDE drive in 2009? 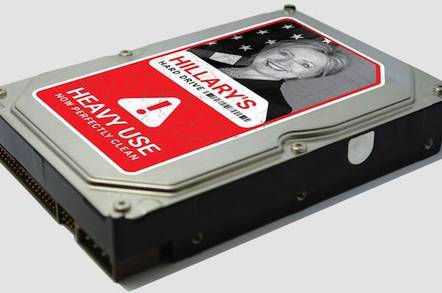 Hillary Clinton's announcement that she will run for the presidency of the United States has seen Republican candidate Rand Paul offer her hard drive for sale.

“You've read about it on the news, now you can get one for yourself,” reads Paul's e-commerce mockup. “100% genuine erased clean email server. Buyer beware, this product has had heavy use and it currently is no longer working, but that doesn't mean it's not valuable to someone. Anyone?”

Paul's attack refers to the fact that Clinton operated a personal email server when she served as secretary of state from 2009-2012. Clinton's insistence the server was not used for classified information hasn't gone down well and became the focus of political attacks.

May we suggest that US voters shouldn't be laughing? We offer that observation because a quick look at the image of Hillary's disk (depicted above) shows the 40-pin IDE/Parallel ATA interface. Clinton took office as secretary of state in 2009, a year in which IDE was well and truly on the way out and it was sensible to buy SATA. If we assume Clinton bought her server in 2009, we either have a presidential candidate with a liking for soon-to-be-obsolete tech or one with a willingness to run crusty old kit in mission-critical environments.

Paul's not coming up roses either: if his team knows so little about disk interfaces that they'll put out propaganda without checking which was likely to be used, what does it say about his presidential credentials? Does the world want a president who is unaware of the passing of IDE and the ascent of SATA?

What's that you say? Such matters are trivial? To which we reply: Clinton's announced her run more than 18 months from election day. The US media's going to want to talk about something between now and then and #IDEgate has the potential to be as substantial as anything else we'll hear in the next few months. ®