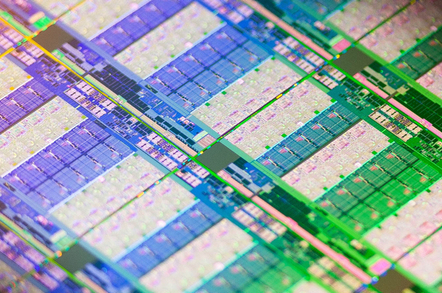 The US government has blocked Intel from shipping high-end Xeon processors to China's supercomputer builders – and other American chip giants are banned, too.

Intel confirmed to The Register last night it was refused permission to sell the chips to the Middle Kingdom's defense labs and other parts of its supercomputing industry.

"Intel was informed in August by the US Department of Commerce that an export license was required for the shipment of Xeon and Xeon Phi parts for use in specific previously disclosed supercomputer projects with Chinese customer INSPUR," a spokesperson for the Santa Clara-based biz said, adding:

Intel complied with the notification and applied for the license which was denied. We are in compliance with the US law.

Those Xeon chips are vital to high-performance computing needed for scientific research and similar work: they will be used to power the 50,000-node, 180-petaFLOPS Aurora supercomputer Intel and Cray are building for the US Department of Energy, due to go live in 2018. China's Tianhe-2 computer, today the world's fastest publicly known supercomputer, uses 3.1 million Intel Xeon E5 cores to hit 54 petaFLOPS in peak performance.

The decision to deny China's boffins access to the powerful processors emerged this week – but was formalized on February 18 in rules [PDF] set by the End-User Review Committee (ERC) in the Bureau of Industry & Security (BIS) at the US Department of Commerce.

The ERC is a joint operation run by the Departments of Commerce, State, Defense, and Energy, and occasionally the Treasury, to decide the organizations American companies can and can't sell to.

The ERC did not respond to our requests for information as to why the four centers were placed on the blacklist. The rule update says entities are blockaded if they pose "a significant risk of being or becoming involved in activities that are contrary to the national security or foreign policy interests of the United States."

Other chip manufacturers, including AMD, contacted by El Reg had no comment on the matter at time of going to press. It appears the US government has decided that China's supercomputing industry will have to do without American processors for the time being.

If the ERC honestly thinks that the ban will put a significant dent in China's supercomputing plans, it is either very foolish or dangerously misinformed.

In the short-term, the ban may slow the development of China's supercomputers slightly, although it wouldn't be hard for a shell company to buy the high-end Xeon processors on the open market, and ship them off to the Middle Kingdom.

At the same time, the US has put Intel in a very sticky position. The company has invested heavily in its presence in the supercomputing market – and in wooing the Chinese – and the ERC decision has just made Chipzilla's life more difficult.

In addition, China is developing processors using the IBM Power architecture, which Big Blue has opened up to more than one Chinese partner. It's not clear how the ERC decision can interfere with this. (Power is definitely a goer in the supercomputer world: a Power9-powered 300-petaFLOPS machine dubbed Summit is being built for the US government by IBM, Nvidia and Mellanox. It is due to arrive in 2017.)

The embargo will add impetus to China's home-grown processor industry, which its government has been investing heavily in developing. Cutting off supplies now is likely to lead the government to open its checkbooks and spend more time and resources building up a processor business to rival the US firms that dominate the market for high-end server chips.

"The governments in China want fast, efficient machines but they don’t want to use chips and systems controlled by vendors outside of China for the same reason the US government gets nervous about deploying machines from Huawei Technologies," Timothy Prickett Morgan, co-editor of our sister site The Platform, noted in March regarding IBM's OpenPower movement.

"Everybody is worried about backdoors that they don’t control, even if they might not exist. This is one reason why Chinese startups are taking a shining to OpenPower."

The CIA term for this kind of cockup is "blowback" – the unintended, harmful consequences of actions. It has become a defining feature of American policy and only last week the former head of the NSA warned about just this kind of processor embargo.

Ex-NSA boss Michael Hayden, writing in the Washington Post this month, said that in the past the US had restricted the sale of high-end chips capable of millions of theoretical operations per second (MTOPS). But when he took over the NSA, Hayden says, he argued against the policy.

"We still wanted an MTOPS advantage, of course, but we were fast realizing that our preferred limits were undermining the global competitiveness of the U.S. computer industry — the very industry on which we relied for our success," he wrote.

"It was becoming clear that the overall health of that industry was more important than any MTOPS advantage against a specific target country. We still insisted on limits with regard to places such as Cuba and North Korea, but we became far more forgiving elsewhere."

He also pointed out that such actions can be used to justify economic and political sanctions against the US by overseas companies and governments. Unilateral action of this type is counterproductive both economically and from a security perspective, he argued. ®