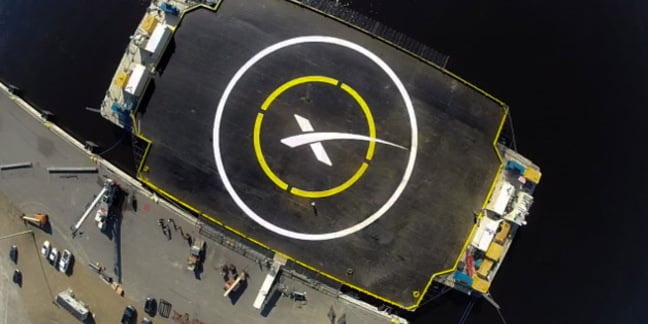 Vid SpaceX is preparing to send a load of supplies up to the International Space Station – a resupply mission due to launch on Monday at 1633 EDT (2033 UTC, 1333 PDT).

Three miutes after takeoff, the reusable first stage of the Falcon rocket carrying the cargo will separate and be piloted back to Earth, so SpaceX can try to land the thing at sea in one piece on a floating barge.

The CRS-6 mission will carry 4,387lb (2,015 kg) of cargo [PDF] up to the ISS, including the first espresso machine designed for use in orbit.

The specially built coffee maker was the brainchild of Italian astronauts Paolo Nespoli and Luca Parmitano, who noticed a lack of espresso on their visit to the ISS. The "ISSpresso" machine was developed by Lavazza and Argotec, and will use water from the recycled urine space station astronauts call "yesterday's coffee."

The payload will also include Arkyd 3 – a prototype surveillance satellite from meteorite-mining firm Planetary Resources – and 28 Flock micro-satellites from Planet Labs that will be fired around the Earth by the ISS launch system.

Planetary Resources will be crossing fingers and toes for the success of the mission: the team's other satellite ended up being scattered all over NASA's Wallops launch facility after the Orbital Sciences rocket attempting to carry it into space failed and had to be detonated seconds after launch.

Arkyd 3 a test version of the satellites Planetary Resources wants in space to spot mineral-rich asteroids: the space telescopes will be expected to find rocks close enough for humankind to explore for minerals. The firm hopes to have automated mining equipment on its first chunk of space rock by 2022, a timeline that looks optimistic at best.

For SpaceX, it's going to be an extremely tight launch window – just a few seconds available – due to the plane and position of the ISS. At time of publication, NASA has given the chances of the launch going ahead at 60 per cent, given the weather forecast.

About two minutes after launch, the first stage of the Falcon rocket will separate, its cold gas thrusters will rotate it 180 degrees, and the main engines will briefly fire again to slow its progress away from the Earth's surface.

The thrusters will then spin the rocket into a vertical position so it can descend to Earth for an attempted landing about nine minutes after launch.

The rocket has four legs built into the hull that will be deployed as it falls earthward toward SpaceX's floating landing pad, named the "Just Read the Instructions" as an homage to the spacecraft named by science-fiction writer Iain M Banks.

Hydraulic wings attached to the rocket will stabilize the craft as it descends. It was the failure of these wings that caused the first landing attempt in January to end in disaster, when the rocket skidded across the landing platform and exploded.

SpaceX boss Elon Musk says the problems with the wings have been fixed, and the firm is hoping for better luck this time. The team had planned to take a second shot at landing a Falcon in February but 50-foot ocean waves damaged the barge and made landing impossible. So far the weather looks good this time.

If there is a successful landing, the Falcon stage will be shipped to land and taken apart for testing and analysis. Reusing rockets is key to Musk's plans to slash the cost of orbital deliveries, but all the components will have to be studied to make sure there aren't going to be any failures on future launches.

Landing the Falcon in one piece is very much a secondary goal – even if the rocket stage fails, the key mission is delivering the cargo to the ISS as part of SpaceX's contract with NASA. The cargo capsule should arrive at the orbiting science lab two days after launch, and three days after that it will be loaded up for the return trip and sent off for a splashdown off the California coast. ®

Happy Satellite Collision Day! It is 10 years since Russia and Iridium got too close for comfort

Plus: Cygnus freighter to spray more sats across the heavens