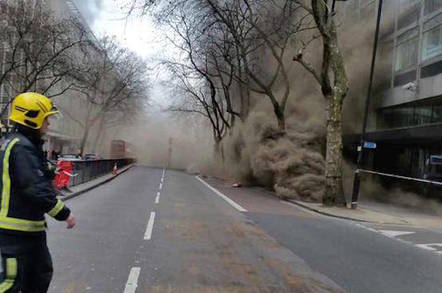 Smoke and flames ... scene of the Holborn fire captured by London Fire Brigade

Last Wednesday's blaze in Holborn, which knocked out power and internet access across London, could have been sparked by thieves pulling a daring heist to pocket £200m in precious stones and metals.

"I've never heard of an outage of electricity like that causing a fire that lasted as long as that. That seems to me as too much of a coincidence."

The fire started in an electrical junction box buried under Kingsway near Holborn Underground Station. It burned through power and internet fiber lines, and led to the evacuation of 2,000 people from the area.

O'Connor's theory is that it was started by jewelry thieves operating under a mile away to create a distraction.

Shortly after the blaze began, the crooks, who had been hiding in a nearby office, drilled through a wall into the lift shaft of the Hatton Garden Safe Deposit Company in London's diamond district. They abseiled down the lift shaft into the company's basement, made sure an alarm system and cameras were disabled, and cut through a series of metal security bars.

Once they reached the vaults, the crims cut through an 18-inch reinforced metal door, and spent the Easter weekend ransacking safe deposit boxes. Estimates of the haul have reached as high as £200m ($300m, AU$390m), and much of the loot may be uninsured.

"If I was a betting man, I would say they would arrest a handful of people that were involved in the actual obtaining of the diamonds – I doubt if they'll get the diamonds back," O'Connor opined on Wednesday this week.

Meanwhile, BT is apparently barred from carrying out repair work to the knackered Holborn facility: the capital's authorities have said the telco's engineers won't be able to get in until the end of the week, it's claimed.

"On Friday BT will be able to survey and assess the impact of the fire damage and then progress with restoring services," local internet service provider Exponential-E warned in an advisory.

"Our partner BT has advised they have conducted reroutes and repairs to as many services as they have been able to gain access to. Unfortunately it is the case that until they have access to the tunnel where the fire initiated, further repairs are not expected."

We'll have to wait until a full investigation reports on the case to know more, but if the robbers were behind the fire then at least they knew their physics. Watchers of the film Ocean's 11 who were of a scientific bent winced when the "EMP pinch" pulled a similar trick. ®