Google wants Marvin the Paranoid Android's personality in the cloud 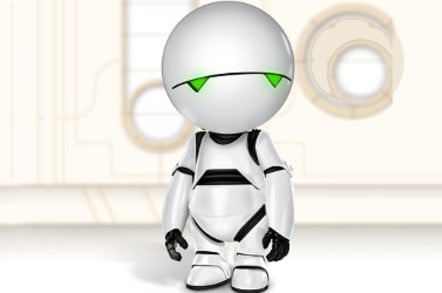 Someone at the Chocolate Factory doesn't realise that Douglas Adams wrote satire, and has patented replaceable robot personalities.

In US Patent 8,996,429, filed in 2012 and published on March 31, Google's Anthony Francis and Thor Lewis propose a robot that “may be configured to tailor a personality for interaction with the user based on the identified information”.

And, just as Zaphod Beeblebrox did with the annoying spaceship personality in The Hitchhiker's Guide to the Galaxy, the Google patent proposes swapping out personalities you don't like with others from – of course – the cloud.

Because there's absolutely no point in leaving users with any sense of privacy when there's a gadget to be had, interactions between the user and the robot will be clouded – to improve the UX, naturally.

The patent also seems to run with a pop-culture reference either to CL Moore's 1944 story No Woman Born or perhaps the 1962 movie The Creation of the Humanoids:

“The robot may be programmed to take on the personality of real-world people (e.g., behave based on the user, a deceased loved one, a celebrity and so on)”.

Robots could also share personalities across the cloud, so that the robot with you in one place could imitate the personality of someone somewhere else.