Soon gonna be proton-smashing 'til the break of dawn 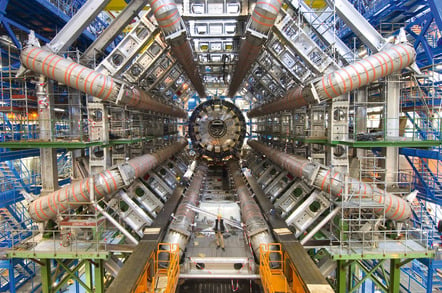 The world's mightiest particle accelerator was resurrected this morning, following a two-year shutdown to upgrade the proton-shattering Large Hadron Collider.

The LHC, which is based at CERN in Geneva, Switzerland, was brought back into operation earlier today.

Scientists said that two proton beams were circulated in opposite directions at their injection energy of 450 GeV within hours of the particle accelerator's restart.

Collisions won't kick in for at least another month, however.

"It’s very satisfying for our operators to be back in the driver’s seat, with what’s effectively a new accelerator to bring on-stream, carefully, step by step," CERN's beam department boss Paul Collier beamed.

CERN has promised that the beefed-up LHC would operate at almost twice the energy of its previous incarnation.

Thanks to the work done in the last two years, it will operate at unprecedented energy – almost double that of season 1 – at 6.5 TeV per beam. With 13 TeV proton-proton collisions expected before summer, the LHC experiments will soon be exploring uncharted territory.

The Brout-Englert-Higgs mechanism, dark matter, antimatter and quark-gluon plasma are all on the menu for LHC season 2.

After the discovery of the Higgs boson in 2012 by the ATLAS and CMS collaborations, physicists will be putting the Standard Model of particle physics to its most stringent test yet, searching for new physics beyond this well-established theory describing particles and their interactions.

Last week, the LHC hit a snag after a short circuit was detected in one of its dipole circuits just days before showtime was set to begin. It had initially been feared that the fault could have caused a couple of months' delay to the restart.

Beam 1, the second to circulate, is successfully through all sectors of the LHC! Startup complete! #RestartLHC pic.twitter.com/ZgI0E1J8k6

Vulture Weekend reported back in February on the upgrade work carried out by CERN scientists.

Among other things, they replaced 18 of the accelerator's 1,232 superconducting dipole magnets, which steer particle beams around the LHC. Splices were also fitted into more than 10,000 electrical interconnections between the dipole magnets. ®